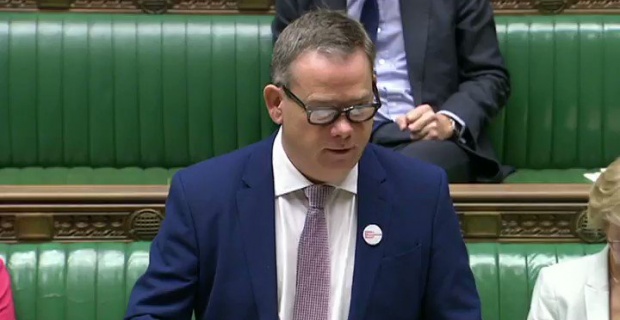 British Minister of Wales Nigel Adams resigned from the government and Conservative Party whip after failing to agree the latest Brexit strategy of Prime Minister Theresa May.

“We must deliver the Brexit people voted for,” Adams criticized May’s decision to start talks with the main opposition Labour Party leader Jeremy Corbyn to find a way forward in the Brexit impasse.

“And we must prevent the calamity of a Corbyn government,” he said in his resignation letter.

Adams added: “I fear that we are now at risk of simultaneously failing in both.”

He said that “…legitimising and turning to Jeremy Corbyn to assist you at this crucial stage, rather than being bold, is a grave error.”

Defending a U.K. departure from the EU with a no-deal, Adams said: “No deal is better than a bad deal.”

“It now seems that you and your cabinet have decided that a deal -- cooked up with a Marxist who has never once in his political life put British interests first -- is better than no deal,” he said.

On Tuesday, May said after a 7-hour long cabinet meeting that she will start talks with Corbyn to look for a way forward to break the Brexit deadlock.

With the U.K.’s first extended Brexit deadline on April 12, British Prime Minister Theresa May also said that it needs an additional short extension from the EU.

“So today I am taking action to break the logjam: I am offering to sit down with the Leader of the Opposition and to try to agree a plan -- that we would both stick to -- to ensure that we leave the European Union and that we do so with a deal,” she said, referring to the Labour leader.

May said “we need to focus on… our future relationship with the EU.

“The ideal outcome of this process would be to agree an approach on a Future Relationship that delivers on the result of the Referendum, that both the Leader of the opposition and I could put to the House for approval, and which I could then take to next week’s European Council,” set for April 10.

The prime minister added that if “a single unified approach” cannot be reached, “then we would instead agree a number of options for the future relationship that we could put to the House in a series of votes to determine which course to pursue.”

May and Corbyn are expected to initiate talks on Brexit on Wednesday.

Keywords:
BrexitUK MinisterNigel AdamsBritish Minister Of Wales Nigel Adams
Your comment has been forwarded to the administrator for approval.×
Warning! Will constitute a criminal offense, illegal, threatening, offensive, insulting and swearing, derogatory, defamatory, vulgar, pornographic, indecent, personality rights, damaging or similar nature in the nature of all kinds of financial content, legal, criminal and administrative responsibility for the content of the sender member / members are belong.
Related News