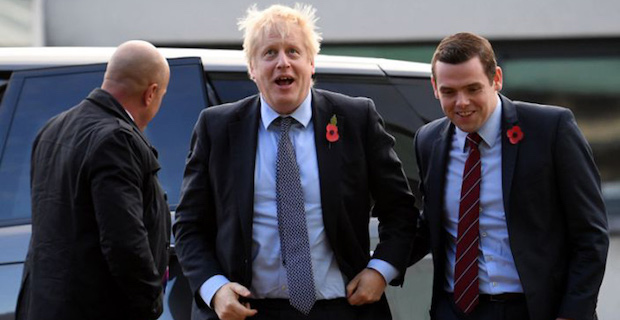 Douglas Ross, a junior minister for Scotland, resigned on Tuesday, becoming the British government’s first casualty of the brewing lockdown breach issue involving Prime Minister Boris Johnson’s top adviser. In his resignation letter, Ross, a member of the ruling Conservative Party, said “a vast majority of people” did not agree with the actions of Dominic Cummings, the premier’s adviser at the center of the controversy. “I haven't commented publicly on the situation with Dominic Cummings as I have waited to hear the full details. I welcome the statement to clarify matters, but there remains aspects of the explanation which I have trouble with. As a result I have resigned as a government Minister,” Ross said.

Cummings, PM Johnson’s top adviser, is accused of breaking lockdown rules by driving over 264 miles across the country.  He has defended himself by saying he was doing the best thing for his family, as both he and his wife were feeling ill and had no one to look after their child in London. His explanations have not significantly changed public opinion on the matter, despite the government – and especially the prime minister – backing him to the hilt. In his resignation letter, Ross also shared his views on Cummings’ defense.

“As a father myself, my instinct is to always do what is best for my son and wife. We have been fortunate not to have caught this awful virus but if we did, we are prepared to follow the government advice and stay at home to contain this virus,” he said.

“While the intentions may have been well meaning, the reaction to this news shows that Mr Cummings interpretation of the government advice was not shared by the vast majority of people who have done as the government asked.” Ross stressed that he “cannot in good faith tell them [his constituents] they were all wrong and one senior advisor to the government was right.”  Twenty MPs belonging to the ruling party want Cummings’ resignation, and opposition parties are meeting on Tuesday to look into the matter. Parts of local media, including the usually Conservative-backing Daily Mail, have also called for his resignation.

In a short statement, Downing Street said PM Johnson “regrets” Ross’ decision to resign. “The Prime Minister would like to thank Douglas Ross for his service to government and regrets his decision to stand down as Parliamentary Under Secretary of State for Scotland,” it said.

Keywords:
UK MinisterLockdownDouglas Ross
Your comment has been forwarded to the administrator for approval.×
Warning! Will constitute a criminal offense, illegal, threatening, offensive, insulting and swearing, derogatory, defamatory, vulgar, pornographic, indecent, personality rights, damaging or similar nature in the nature of all kinds of financial content, legal, criminal and administrative responsibility for the content of the sender member / members are belong.
Related News