Health Secretary Matt Hancock has told MPs the government has "been straight with people" throughout the pandemic. 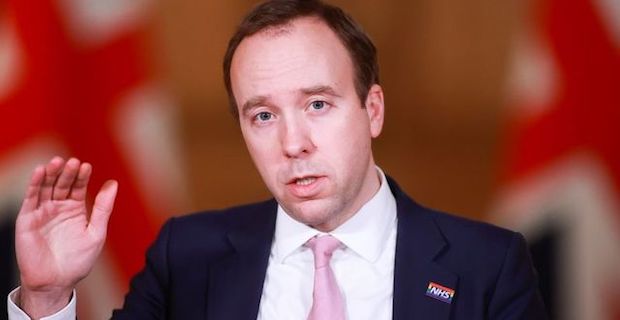 This follows a claim by Dominic Cummings, the prime minister's former chief adviser, that Mr Hancock lied to colleagues about dealing with Covid in care homes. But the health secretary dismissed the allegation as "unsubstantiated" and "not true". Labour said Mr Hancock may have broken ministerial standards rules. And it demanded "full answers" on the government's efforts to protect care homes, in which it said more than 30,000 people had died from Covid.

Appearing before a parliamentary committee investigating "lessons learnt" during the Covid crisis on Wednesday, Mr Cummings was scathing about Mr Hancock. He claimed the health secretary "should have been fired for at least 15 to 20 things, including lying to everybody on multiple occasions in meeting after meeting in the Cabinet Room and publicly". Mr Cummings also said: "Hancock told us in the Cabinet Room that people were going to be tested before they went back to care homes... We only subsequently found out that that hadn't happened." Subsequent government claims about putting a shield around care homes were "complete nonsense", he added.

Answering an urgent question from Labour, Mr Hancock told MPs: "I welcome the opportunity to come to the House (of Commons) to put formally on the record that these unsubstantiated allegations around honesty are not true, and that I've been straight with people in public and in private throughout."

Mr Hancock also told MPs the government had "taken an approach of openness, transparency and explanation of both what we know and of what we don't know".

In an apparent barb aimed at the PM's former adviser, Mr Hancock said the "operation and function" of government had become "easier" over the past six months.

He added: "These allegations from Cummings are either true, and, if so, the secretary of state potentially stands in breach of the ministerial code and the Nolan principles [on behaviour in public life], or they are false and the prime minister brought a fantasist and a liar into the heart of Downing Street?

"Which is it? Families who have lost loved ones deserve full answers from him."

The Health Secretary replied: "The challenge is we had to build testing capacity, and at that time of course I was focused on protecting people in care homes and in building that testing capacity so that we had the daily tests to be able to ensure that availability was more widespread."

The SNP's Martyn Day called for the government's full Covid inquiry - set to begin next year - to be brought forward, but Mr Hancock rejected the idea.

And the Green Party's Caroline Lucas said the public "deserve better than the grotesque pantomime of the Cummings evidence session", urging the government to publish any findings it has so far on its handling of the pandemic.

Keywords:
Matt HancockUK Health Secretary
Your comment has been forwarded to the administrator for approval.×
Warning! Will constitute a criminal offense, illegal, threatening, offensive, insulting and swearing, derogatory, defamatory, vulgar, pornographic, indecent, personality rights, damaging or similar nature in the nature of all kinds of financial content, legal, criminal and administrative responsibility for the content of the sender member / members are belong.
Related News