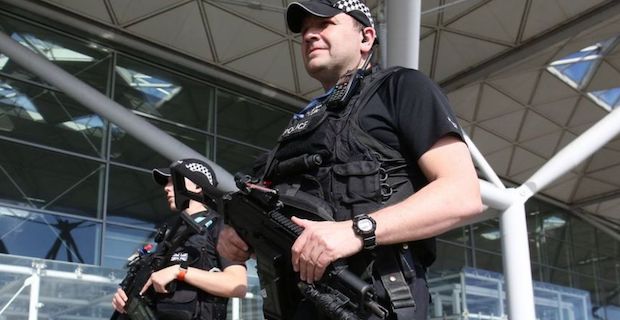 British counter-terrorism officers have detained two men arriving in London’s Stansted Airport Sunday evening, authorities confirmed. A 34-year-old man from Kuwait and a 48-year-old man from Italy have been escorted off a Ryanair plane, which was intercepted by two RAF Typhoon fighter jets after reports of a security threat on board.

The men had arrived on a flight from Vienna and were detained under Schedule 7 of the Terrorism Act, according to a police statement.

Some passenger tweeted after they were permitted to leave the plane following the two men’s detention by armed police.

They said police found suspicious material in the plane’s toilet.

A Ryanair spokesman said the crew were “alerted of a potential security threat on board.”

“In line with procedures, the captain informed UK authorities and continued to London Stansted, where the aircraft landed normally and taxied to a remote stand where passengers disembarked safely,” he said.

Keywords:
RyanairBritish Counter-terrorism OfficersArrestLondon’s Stansted Airport
Your comment has been forwarded to the administrator for approval.×
Warning! Will constitute a criminal offense, illegal, threatening, offensive, insulting and swearing, derogatory, defamatory, vulgar, pornographic, indecent, personality rights, damaging or similar nature in the nature of all kinds of financial content, legal, criminal and administrative responsibility for the content of the sender member / members are belong.
Related News