A British man and a French man have gone missing while backpacking in Australia, sparking a police search. 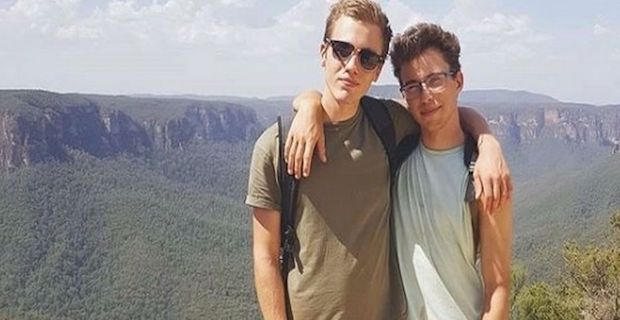 The alarm was raised when passersby found items belonging to Hugo Palmer and Erwan Ferrieux, both 20, on a beach north of Sydney on Monday, authorities said.

Police searched the location, Shelly Beach, and discovered the pair's rental car nearby.

Other personal items, including travel documents, were found in the vehicle.

Police began ground and water searches on Monday, but they have not found any sign of the men.

The pair had arrived in the region on Sunday, said the local Port Macquarie News, which reported that Mr Palmer was from East Sussex.

"From the information that we have received, they were travelling down the east coast, stopping at various locations along the way," he told the Australian Broadcasting Corporation.

A British High Commission spokeswoman said: "Our staff are in contact with police in Australia and the UK following reports of a missing British man at Shelly Beach, New South Wales."

Shelly Beach is a popular surfing and walking site in Port Macquarie, located about 380km (250 miles) north of Sydney.

Keywords:
UK And French Tourists MissingShelly Beach
Your comment has been forwarded to the administrator for approval.×
Warning! Will constitute a criminal offense, illegal, threatening, offensive, insulting and swearing, derogatory, defamatory, vulgar, pornographic, indecent, personality rights, damaging or similar nature in the nature of all kinds of financial content, legal, criminal and administrative responsibility for the content of the sender member / members are belong.
Related News