UK and Ecuador in deadlock over Assange 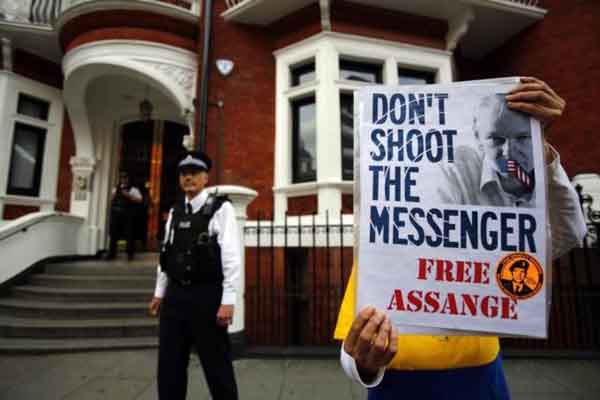 Britain and Ecuador have failed to break the deadlock over the unresolved asylum case of WikiLeaks founder Julian Assange, nearly a year after he took refuge in the Ecuadorean embassy in London to avoid extradition to Sweden. UK's Foreign Secretary William Hague and his Ecuadorean counterpart, Ricardo Patino, agreed on Monday to establish a working group to try to resolve the diplomatic standoff. "The two ministers held a bilateral meeting this morning for 45 minutes," the Foreign Office said in a statement. "Ministers agreed that officials should establish a working group to find a diplomatic solution to the issue of Julian Assange, but no substantive progress was made." The Foreign Office said any solution would have to fall within the law of the United Kingdom. Patino, who is on a visit to Britain, met Assange at the South American country's central London embassy on Sunday. He told reporters after meeting Hague: "The Ecuadorean government maintains that the reasons for which Ecuador granted asylum are still relevant and therefore there is going to be no change in his circumstances."

Assange, 41, fled to the embassy last June to avoid extradition to Sweden to face allegations of sexual assault and rape, which he denies.

Ecuador granted him political asylum last August, saying it feared for his safety, but Britain has made it clear he will be arrested if he tries to leave the embassy.

Assange fears that if he is sent to Sweden he might be liable for onward extradition to the US to face potential charges over the release of thousands of confidential US documents on the whistleblower website WikiLeaks.

Ecuador says that Assange's extradition to a third country without proper guarantees is probable, and that legal evidence showed he would not get a fair trial if eventually transferred to the US.