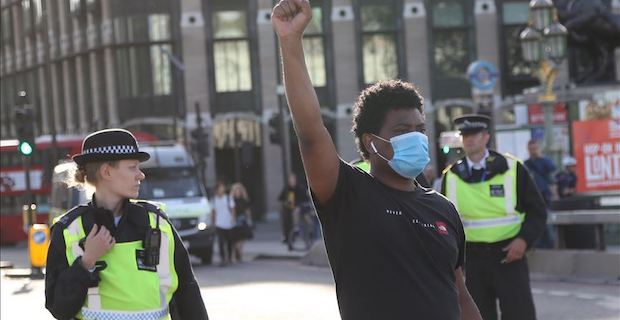 Fifteen police officers have been injured during efforts to disperse an unlicensed street party in Brixton, South London Wednesday night, Metropolitan Police said. Police attended to encourage the crowd to leave the location but they did not engage with police and “the group became hostile towards officers,” police statement said. “Police were called to Cecilia Road, Lambeth on the evening of Wednesday, 24 June to multiple reports of a large unlicensed music event in the street.”

The brawl between the crowd and police turned violent during the incident and social media videos showed police retreating from the area and some police vehicles were damaged.

“In total, 15 officers were injured, none seriously although two did require hospital treatment,” Met Police said, adding a number of police vehicles were damaged.

Four people had been arrested before the event was cleared in the early hours of Thursday, according to the statement.

“These gatherings are unlawful, as well as posing a risk to public health and against coronavirus restrictions,” he added.

“The violence shown towards officers is totally unacceptable and we will not tolerate it in any form,” Wingrove said.

“An investigation into the incident is now taking place and those involved will be brought to justice.”

Tensions in British capitals have been running high since the Black Lives Matter (BLM) protests started after the killing of George Floyd, an unarmed black man, by a police officer in the US.

Dozens of BLM protests have been held in the city and across the UK, during which clashes between protesters and police occurred.

Illegal rave parties are common in the city especially in summer months.

Keywords:
PoliceUKPolice UkClashBrixtonMusic Event
Your comment has been forwarded to the administrator for approval.×
Warning! Will constitute a criminal offense, illegal, threatening, offensive, insulting and swearing, derogatory, defamatory, vulgar, pornographic, indecent, personality rights, damaging or similar nature in the nature of all kinds of financial content, legal, criminal and administrative responsibility for the content of the sender member / members are belong.
Related News