British police said on Wednesday they would be working with the U.S. Air Force and others to find out why a U.S. military helicopter crashed 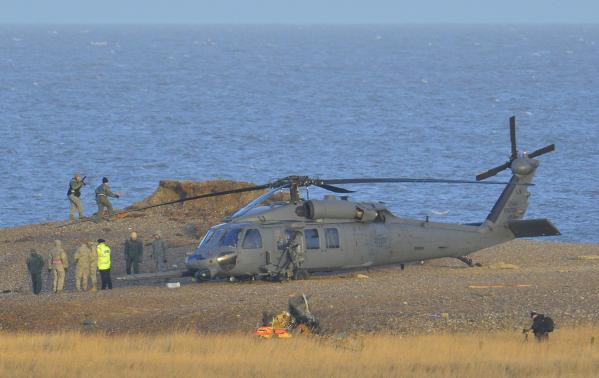 Wreckage included munitions was spread over a wide area of the crash site in difficult terrain. The helicopter, a Pave Hawk assigned to the 48th Fighter Wing based at RAF Lakenheath air base, was performing a low-level training mission along the Norfolk coast when it went down in marshland on Tuesday evening. The cause of the crash, which occurred in a nature reserve near the village of Cley next the Sea, was not known. The area is about 130 miles northeast of London. "We will be working with our partners at the Ministry of Defence, Air Accident Investigation Branch and U.S. Air Force to gather all evidence from the scene and then recover the aircraft," said Chief Superintendent Bob Scully of Norfolk Constabulary, the local police force. "This is difficult terrain with marshland and tides coupled with wreckage containing munitions covering a large area," he said in a statement. A 400-metre (quarter mile) area around the crash site remained cordoned off to preserve public safety. No one on the ground was thought to have been hurt, authorities said. Earlier, the 48th Fighter Wing, which also flies F-15 fighter jets, confirmed the deaths of all four airmen on board and said their names would be released 24 hours after their next-of-kin had been informed. The Pave Hawk is made by Sikorsky Aircraft Co, a unit of United Technologies Corp. According to the U.S. Air Force website, it is a modified version of the Army Black Hawk and its primary mission is "to conduct day or night operations into hostile environments to recover downed aircrew or other isolated personnel during war".

Scully told reporters at Cley next the Sea that debris was scattered across an area about the size of a football field. Most of the debris was in marshland although some of it was vulnerable to high tides and was being removed swiftly.

Scully said a coroner, who under English law will be responsible for the investigation into the four deaths, was carrying a daylight assessment and once he had given his consent, authorities would arrange for the removal of the bodies.

"The situation that we have now is that we are obviously moving from a potential rescue operation to one of preserving the scene and carrying out an investigation," Scully told reporters.

"We are now working with the U.S. military and the RAF (Britain's Royal Air Force) to assist in their investigation and ours at the present time, and at some point we will hand over to the air investigation side of the military, both UK and U.S."

A second helicopter, which had been taking part in the same training exercise as the one that crashed, had landed at the site and was still there, Scully said.

"It will be a matter for the investigation to determine whether or not there was any causal link. My understanding is that apparently not, but we don't know. And that's the important thing, we shouldn't be speculating here," Scully said.