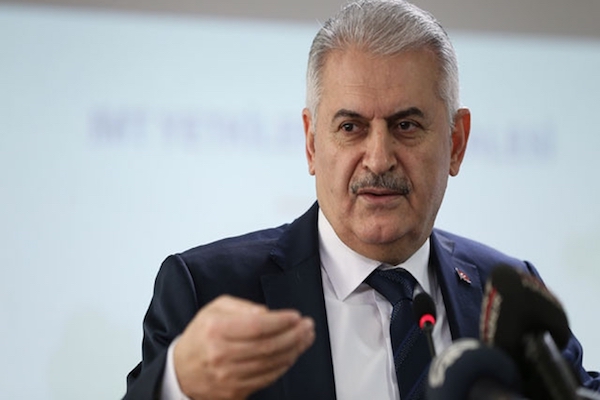 In a press conference following his meeting with Çipras, Yıldırım said that they discussed the issues regarding the EU, Cyprus, the Eastern Mediterranean and Agean. He stressed that the energy resources in the Eastern Mediterranean are a common heritage of humanity, and that the rights of both sides on the island should be considered when using these resources. Yıldırım also said that Greece and Turkey decided to “contribute in a positive way” to a Cyprus settlement. “A solution to the Cyprus issue should guarantee the security and future of both the Turkish and Greek people living on the island,” he said. Adding that the two countries and Britain will participate in peace talks along with the two Cypriot sides in Switzerland on 28 June, Yıldırım said that efforts should be made towards reaching a settlement in Cyprus within the framework of the UN resolutions and the EU acquisition.

Greek Prime Minister Çipras said, “We are continuing our efforts to take a further step in Geneva. We are working to reach a solution in Cyprus. We agreed on continuing our cooperation and achieving a solution”. Ertuğruloğlu: “A guarantee system without Motherland Turkey’s right to unilateral intervention is impossible” Foreign Minister Tahsin Ertuğruloğlu and Turkish Foreign Minister Mevlüt Çavuşoğlu held an interdelegation meeting in Ankara. Following the meeting, the two ministers made statements to the press. Minister Ertuğruloğlu said, “I want to emphasize that a guarantee system which does not include Motherland Turkey’s right to unilateral intervention is not really a guarantee system, and the TRNC government is very decisive and persistent on this point”. Emphasizing that he does not accept the statements that say that Turkey’s guarantee causes insecurity for the Greek Cypriot side, Ertuğruloğlu said that none of the Turkish Cypriot side or Turkey’s policies have created insecurity for the Greek Cypriots, and this will continue to be the case. He also said that the 1974 Peace Operation happened after the Greek Cypriots’ attempted coup and their willingness to implement Enosis, and that nobody from the Turkish Cypriot side agrees with such arguments that state that “Turkey’s guarantee causes insecurity”.

Ertuğruloğlu said, “The statements of both President Akıncı and Turkish President Recep Tayyip Erdoğan regarding the issue of territory are essential to us. The Turkish Cypriot people will never accept any settlement except for a partnership based on the political equality of both sides. We are seeking an agreement that guarantees that the 4 freedoms for the citizens of the Republic of Turkey will not be denied and that the island of Cyprus will never be a Greek island”. Turkish Foreign Minister Mevlüt Çavuşoğlu stated that it is necessary to be well-prepared for the Cyprus conference on 28 June in Crans-Montana, Switzerland. Çavuşoğlu said, “We are always ready. We have already explained that the conference should be attended without preconditions. We also said that we will not accept the preconditions proposed by the Greek Cypriot side. We consider this conference as the final conference. The Turkish Cypriot side will attend the conference in Crans-Montana well-prepared and self-confident to defend their interests”.