Turks and Greeks living in Turkey's northwestern Canakkale province on Wednesday prayed for the victims of wildfires near Greece's capital. 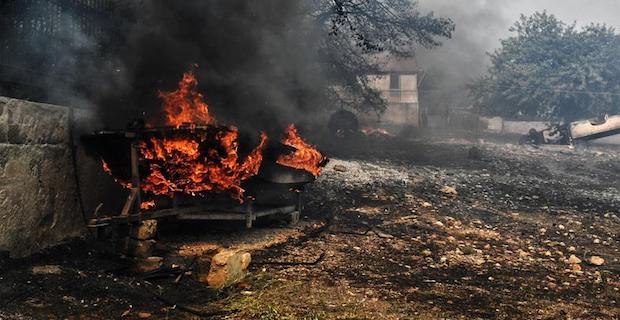 Turks and Greeks living in Turkey's northwestern Canakkale province on Wednesday prayed for the victims of wildfires near Greece's capital.Locals in Gokceada district gathered at a ceremony carrying banners in Turkish, Greek, and English saying "We share your pain".

On Monday, fires broke out on the east and west coasts of Greece's Attica region, home to the capital Athens, killing 81 people and injuring more than 170.

The fires have forced thousands of locals to flee to safer areas as firefighters battle the blazes.

Erdogan conveyed his condolences to Tsipras on the loss of lives and wished a speedy recovery to the injured.

Some of the casualties occurred when people were stuck in their homes or vehicles or when they drowned in the sea while trying to escape the flames.

More than 700 people who escaped the fire and reached the country’s shores were transported to safe areas by coastguard teams and private boats.

Keywords:
Greek Victims Of WildfiresGreek WildfiresTurks And Greeks
Your comment has been forwarded to the administrator for approval.×
Warning! Will constitute a criminal offense, illegal, threatening, offensive, insulting and swearing, derogatory, defamatory, vulgar, pornographic, indecent, personality rights, damaging or similar nature in the nature of all kinds of financial content, legal, criminal and administrative responsibility for the content of the sender member / members are belong.
Related News