The couple who tied the knot in the Turkish province of Kilis in the Syrian border and invited 4,000 Syrian refugees to celebrate with them 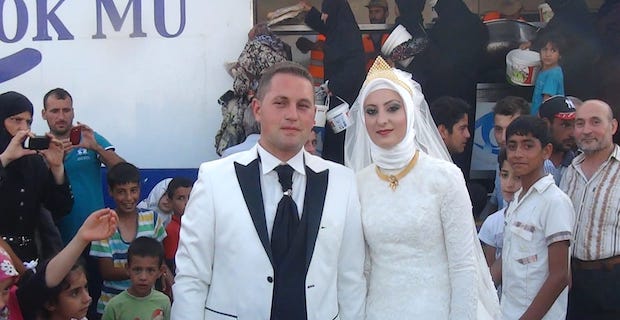 A Turkish bride and groom decided to share their joy on their wedding day by inviting 4,000 Syrian refugees to eat with them and celebrate in the southern Turkish city of Kilis.  Fethullah Üzümcüoğlu and Esra Polat, who got married in the province which is near the Syrian border last week, invited some of those refugees who have fled the country since the civil war which began four years ago.  Turkey has welcomed nearly two million Syrian refugees and in Kilis, there are 4,000 refugees that Kimse Yok Mu (Is Anybody There?), a Turkish charity which provides help to millions across the world, is responsible for providing food to.

In total, there are four million Syrian refugees who had fled the countryin what the UN described as the worst crisis of its kind in a generation. Almost eight million people are displaced within the country, the UN said last month.

The idea for sharing their special day with those less fortunate was that of the groom's father, Ali Üzümcüoğlu. He told Serhat Kilis newspaper that he hoped others would do the same and share their wedding celebrations with their Syrian brothers and sisters.

The father also said he was glad that the couple began a new life "with such a selfless action". Wedding guests shared food using trucks and those providing meals included the bride and groom themselves.

Hatice Avci, a spokesman for Kimse Yok Mu, told i100.co.uk that on Thursday, the couple pooled the money they had received from their families to host a party with the refugees who live in and around the city.

Kimse Yok Mu is affiliated with the Gülen movement, also known as the Hizmet (Service) movement, which is inspired by the teachings of Fethullah Gülen, a Turkish Islamic preacher in self-imposed exile in Pennsylvania.

The bride, Mrs Polat, told i100 what a wonderful experience it was and how happy she was to share the meal with those in need.

"I was shocked when Fethullah first told me about the idea but afterwards I was won over by it. It was such a wonderful experience. I’m happy that we had the opportunity to share our wedding meal with the people who are in real need," she said.

According to local media, local singer Reşit Muhtar also helped out and provided food to the special guests.

And his father just might have got his wish. His son said that his friends were so inspired, they hoped to do the same during their wedding celebrations.

Keywords:
Turkish CoupleWeddingSyrian Refugees
Your comment has been forwarded to the administrator for approval.×
Warning! Will constitute a criminal offense, illegal, threatening, offensive, insulting and swearing, derogatory, defamatory, vulgar, pornographic, indecent, personality rights, damaging or similar nature in the nature of all kinds of financial content, legal, criminal and administrative responsibility for the content of the sender member / members are belong.
Related News