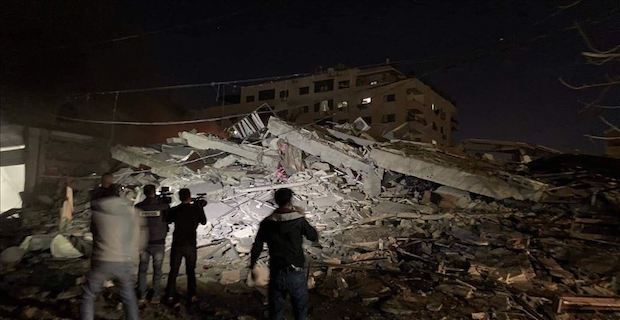 “Targeting of @AnadoluAgency #Gaza office is new example of Israel’s unrestrained aggression,” Turkish Foreign Minister Mevlut Cavusoglu said on Twitter and added: “#Israeli violence against innocent people w/out distinction is a crime against humanity. Those who encourage Israel are also guilty.

“Will keep defending #Palestinian cause, even if alone.”

“We condemn Israel in the strongest possible terms for targeting a building in the West Bank, in which the @anadoluagency office was located,” Presidential Communications Director Fahrettin Altun also said on Twitter.

“We urge all governments that claim to defend press freedom, including @USEmbassyTurkey, to join us in condemning the Israeli government,” Altun added.

“Israel's hitting Anadolu Agency's office [in Gaza] is an attempt to get rid of the witnesses, a preparation of massacres in Gaza,” Palestinian government said in a statement.

The strikes occurred following reports that two Israeli soldiers had been injured by gunfire near the Gaza-Israel buffer zone on Friday.

Keywords:
Turkish Anadolu AgencyAnadolu AgencyAa Anadolu AgencyIsraeli ForcesAa Office Gaza Strip
Your comment has been forwarded to the administrator for approval.×
Warning! Will constitute a criminal offense, illegal, threatening, offensive, insulting and swearing, derogatory, defamatory, vulgar, pornographic, indecent, personality rights, damaging or similar nature in the nature of all kinds of financial content, legal, criminal and administrative responsibility for the content of the sender member / members are belong.
Related News