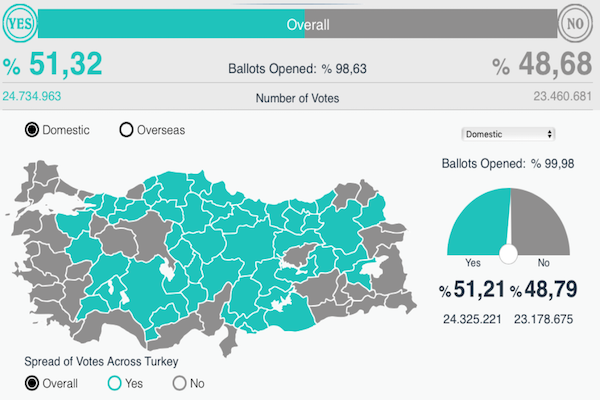 AVRUPA TIMES/LONDON-Latest news, The referendum has divided Turkey - a country facing no shortage of problems. Turks have backed President Recep Tayyip Erdogan's call for sweeping new presidential powers, partial official results of a referendum indicate.With about 98% of ballots counted, "Yes" was on about 51.3% and "No" on about 48.7%.Erdogan supporters say replacing the parliamentary system with an executive presidency would modernise the country.Opponents have attacked a decision to accept unstamped ballot papers as valid unless proven otherwise.The main opposition Republican People's Party (CHP) is already demanding a recount of 60% of the votes."Yes" vote could also see Mr Erdogan remain in office until 2029.The president has now called the head of the AK Party (AKP) he co-founded and other party leaders to congratulate them on the victory, the Anadolu news agency said.Avrupa Times