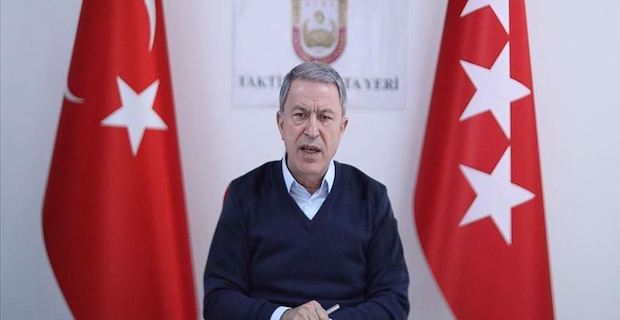 Turkey, with Spring Shield Operation launched on Sunday in Idlib, northwestern Syria in response to regime attacks, has neutralized 2,557 regime elements, said the country's defense minister on Monday. On the details of the operation, Hulusi Akar said the operation has been continuing successfully as planned, and the country has also destroyed 2 jets, 2 drones, 8 helicopters, 135 tanks, and 5 air-defense systems of the Syrian regime.

Akar also pointed out that as a guarantor country, Turkey fulfills all responsibilities arising from the commitments.

“Our expectation from Russia at this point is to fulfill its commitments as the guarantor country, and in this context, to use its influence over the regime to make it halt its attacks and withdraw to the lines set under the Sochi agreement.”

Akar said talks between Ankara and Moscow are underway.

He added that Turkey does not aim a face-off with Russia and its only aim is to stop the regime massacres and to prevent radicalization and migration.

Turkey on Sunday launched Operation Spring Shield after at least 34 Turkish soldiers were martyred and dozens injured in an Assad regime airstrike in Idlib, a de-escalation zone in northwestern Syria, just across Turkey’s southern border.

Turkey’s only target during the operation is Assad regime soldiers and elements in Idlib under the nation's right to self-defense, stressed Akar.

The martyred Turkish soldiers were working to protect local civilians under a September 2018 deal with Russia, which prohibits acts of aggression in Idlib.

But more than 1,300 civilians have since been killed in attacks by Assad regime and Russian forces in the zone, as the cease-fire continues to be violated, sending about a million refugees towards Turkey's border with Syria.

Keywords:
TurkeySyrian Regime
Your comment has been forwarded to the administrator for approval.×
Warning! Will constitute a criminal offense, illegal, threatening, offensive, insulting and swearing, derogatory, defamatory, vulgar, pornographic, indecent, personality rights, damaging or similar nature in the nature of all kinds of financial content, legal, criminal and administrative responsibility for the content of the sender member / members are belong.
Related News