Trump: US will delay some US tariffs on Chinese goods

'We have agreed, as a gesture of good will, to move the increased Tariffs on 250 Billion Dollars worth of goods,' Trump says 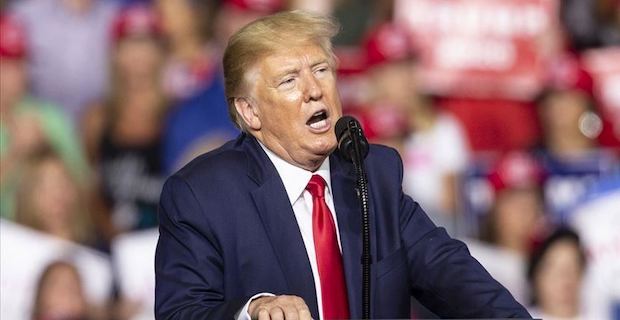 The U.S. will delay by two weeks a bump in tariffs on Chinese goods that were set to go into effect Oct. 1, President Donald Trump announced Wednesday.  The decision, Trump said, was made as a concession to Beijing as it prepares to celebrate at the start of October the 70th anniversary of the founding of modern China.

"At the request of the Vice Premier of China, Liu He, and due to the fact that the People's Republic of China will be celebrating their 70th Anniversary on October 1st, we have agreed, as a gesture of good will, to move the increased Tariffs on 250 Billion Dollars worth of goods (25% to 30%), from October 1st to October 15th," Trump wrote on Twitter.

Trump announced in late August he will boost tariffs on $550 billion worth of Chinese imports, including increased penalties that were to take effect early next month. All told, the tariffs encompass just about all U.S. imports of Chinese goods.

The ongoing trade war between the world's top two economies has sent shockwaves throughout the global economy as the U.S. and China have exchanged wave after wave of tariffs with a long-sought agreement to halt the feud nowhere in sight. Investors have been fretting about the possibility that the dispute could lead to a global recession.

More than a year of ongoing negotiations between the sides have failed to produce meaningful signs of progress towards a comprehensive deal.

The U.S. has sought remedy to its disproportionate trade imbalance with China, as well as claims of intellectual property theft and forced technology transfer by Beijing.

The Chinese government earlier Wednesday announced it would exempt tariffs on 16 American goods for a year beginning Sept. 17.

The mutual steps to water down the trade recriminations come ahead of another round of negotiations expected to begin in October.

Keywords:
Donald TrumpTrumpChinese Goods
Your comment has been forwarded to the administrator for approval.×
Warning! Will constitute a criminal offense, illegal, threatening, offensive, insulting and swearing, derogatory, defamatory, vulgar, pornographic, indecent, personality rights, damaging or similar nature in the nature of all kinds of financial content, legal, criminal and administrative responsibility for the content of the sender member / members are belong.
Related News