Trump travel ban was protested in the airport

Some demonstrators vow to stay at airports until all detainees released 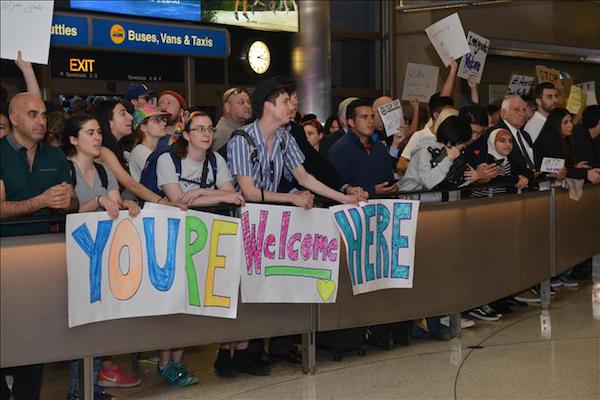 Dramatic scenes played out for a second straight day at airports and other locations across the U.S. as massive demonstrations took place against a sweeping ban on immigration from seven Muslim-majority countries.

An undetermined number of travelers who had been already cleared to be allowed into the U.S. were detained at various airports around the country within the past 48 hours.

At least three of 12 passengers who were detained at John F. Kennedy International Airport in New Yor were reportedly released Sunday.

In Philadelphia, a diverse group of thousands of protesters descended on different areas of the city’s international airport for a second day to show support for Muslims and others affected by Trump’s policies.

One of those that protested was Sudanese-American Wisal Abdelal. Her parents have green cards and have scheduled a trip to see her in the U.S. in April. The travel ban has put those plans on hold, she told Anadolu Agency. “If he needs to ban -- the banning is supposed to be for all countries. Why did he select just a few countries?” she said. “No Sundanese attacked the United States.”

Abdelal’s parents are “hopeful” they can still return to the U.S. and become citizens but in the meantime, she has a message for the president. “He needs to return his decision because this is not fair,” she said. “We are not terrorist … Sundan is not supposed to be on the list.”

As lines of cars snarled traffic to and from the airport, demonstrators shouted familiar slogans about not building a wall on the country’s southern border to keep out undocumented immigrants from central America and Mexico and, desires for a diverse and inclusive nation.

But some demonstrators participated in dueling protests, 15 feet (5 meters) apart.

A mostly white crowd that gathered just beyond the doors of Terminal A was criticized by a smaller predominantly black and minority group inside the building that was engaged in a sit-in.

They charged the larger group with benefiting from privilege and trying to take over the demonstration.

“You’re coming to our protests because it’s a protest for black and brown folks who are facing violent protests and all we ask you to do is sit [expletive] down,” she said, but did not stop there.

Ngozi, who was reluctant to give her last name due to security concerns, is another sit-in leader who was inside the terminal and went further while speaking to Anadolu Agency.

There are now issues that are integral to everyone’s survival but “white people are making it about themselves” she said as she railed against a ”racist” capitalistic economic model she said has allowed the Trump administration to get to this point.

She also wants to see the entire current system of things, under Democratic and Republican administrations dismantled. “That is what needs to change,” she said.

The protest was more deeply personal for Ngozi who followed her mother into the nursing profession.

After spending years as an undocumented immigrant from Nigeria, her mother was deported by former President Barack Obama in 2009.

“I live with the pain everyday,” an emotional Ngozi said as she recalled the last time she saw her mother in 2010 before she returned to the U.S. from Nigeria.

She said Trump’s policies are ripping families apart and nothing she or any of her fellow demonstrators have said is new. “It’s been said time and time again by Freddie Hampton, Angela Davis” and others, she said while remembering the words of militant black civil rights leaders of the 1960s.

Philadelphia Mayor Jim Kenney said two people who had been held in detention were released.

Demonstrations lasted well in to the night across the country with some defiant protesters promising to remain at airports until all detainees are released.

Trump on Sunday released a statement that defended the ban and rejected claims it was against Muslims.

“To be clear, this is not a Muslim ban, as the media is falsely reporting,” he said. “This is not about religion – this is about terror and keeping our country safe. There are over 40 different countries worldwide that are majority Muslim that are not affected by this order.”

For David Acker, that explanation rings hollow. “He’s not of sound mind,” he said of Trump.

Acker showed up with his mixed-race 9-year-old daughter to teach her an important lesson about history, he said.

“We all know the history of World War II of Jews being denied entry to the United States and Great Britain because they were afraid of too many immigrants coming to the county,” he said. “And we teach our children to say, ’Never again!’ And we have to keep it form happening again -- not just to us but to all people how are escaping terrible, dangerous situations. As a Jew I feel it especially important to come out in support of our Muslim brothers and sisters.”

Trump has effectively banned 218 million people from the Mideast and Africa.

On Sunday. attorney generals from 15 states and the District of Colombia said they believe the travel ban is unconstitutional and would eventually be tossed out of court.