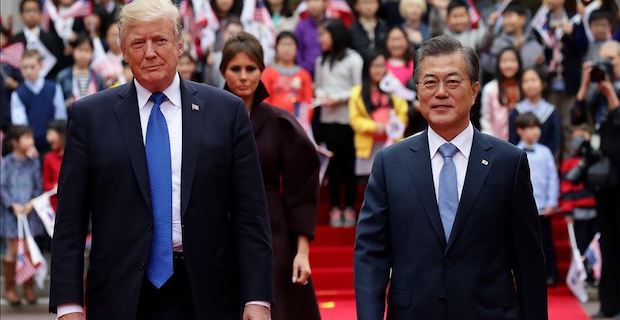 U.S. President Donald Trump will hold a summit level meeting with his South Korean counterpart Moon Jae-in, when he travels to Seoul in June.  The two leaders are expected to discuss issues related to North Korea, as well as ways to strengthen the U.S.-South Korean alliance. “The two presidents are expected to discuss how to bolster the RoK-U.S. alliance and establish a permanent peace regime through complete denuclearization of the Korean Peninsula, building on the foundation of close coordination between the two countries,” a statement issued by the South Korean presidency said.

RoK stands for Republic of Korea – the official name of South Korea. Both leaders had last met on April 11, in Washington.

Though agenda for the summit was not announced, both leaders are expected to discuss the stalled denuclearization dialogue between Washington and Pyongyang. Trump will be in the region to attend the G-20 Summit scheduled in Japan in last week of June.

The statement said a detailed schedule of the summit will be put out after discussions through diplomatic channels.

The announcement of Trump’s visit to Seoul has come amid the North hardening its stance. Earlier this month, North Korea tested two sets of missiles. The moves were seen as a provocation, invoking sharp reactions from Tokyo.

However, Trump and Seoul chose to play down these tests.

Last February Trump had abruptly ended a summit with North Korean leader Kim Jong-un, when he insisted on easing of international sanctions without assuring dismantling of his nuclear program.

A UN body in its recent assessment said that a million people in the Communist country are facing starvation and need emergency food aid.

Keywords:
Moon Jae-inDonald TrumpNorth Korea
Your comment has been forwarded to the administrator for approval.×
Warning! Will constitute a criminal offense, illegal, threatening, offensive, insulting and swearing, derogatory, defamatory, vulgar, pornographic, indecent, personality rights, damaging or similar nature in the nature of all kinds of financial content, legal, criminal and administrative responsibility for the content of the sender member / members are belong.
Related News