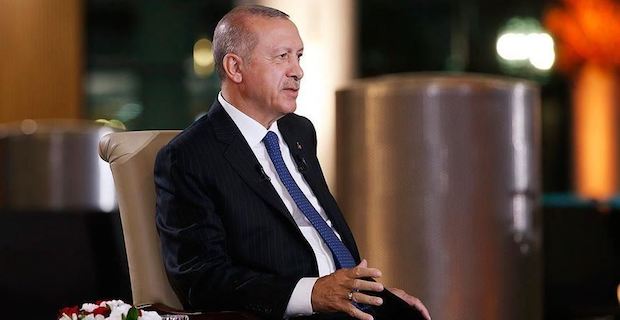 The U.S. president knows Turkey’s security concerns, and why it needs Russian S-400 air defense system, the Turkish president said in an interview with Japanese media. “I believe my meeting with U.S. President Trump during the G-20 summit will be important for eliminating the deadlock in our bilateral relations and strengthening our cooperation,” Recep Tayyip Erdogan told Nikkei Asian Review, a Tokyo-based publication, in an interview published Wednesday, ahead of G-20 Summit in Osaka, Japan on June 28-29.

“Regarding the S-400s, Trump knows Turkey's concerns, why we needed this system and how we came to this point very well,” Erdogan said.

The Turkish leader said the meeting with Trump in Japan will review all aspects of the ties between the two countries.

“We will also review the developments in the north of Syria,” he underlined.

The two leaders will also speak about a visit by Trump to Turkey in July.

Erdogan also reiterated that the S-400 air defense system procurement issue is a goods and services procurement for meeting the urgent security needs of Turkey.

“In our search for an effective air defense system against the security threats, technology transfer and cost-benefit analysis were priorities for us,” Erdogan said.

U.S. officials have urged Turkey to buy U.S. Patriot missiles, arguing the Russian system would be incompatible with NATO systems and expose the F-35s to possible Russian subterfuge.

Turkey has urged formation of a commission to clarify any technical issues, but the U.S. has failed to respond to this proposal.

“We are proceeding according to our road map. It is out of the question for us to compromise from this road map,” Erdogan stressed.

Reminding that Turkey has already paid $1.25 billion for the F-35 project, Erdogan said: “If they do make such a wrong move, we will take it to the international arbitration court because we will want them to pay us back the money we have spent so far.”

Noting that Turkey has put forward a suggestion on establishment of a joint commission to eliminate the concerns of U.S., Erdogan said: “Derailing the process, exerting a language of threats will benefit no one.”

The Turkish president also said that the Countering America's Adversaries Through Sanctions Act (CAATSA) cannot be applied to Turkey because Turkey took the step of buying the S-400 before CAATSA came into effect.

Responding to a question on Western countries' growing concern that Turkey is leaning away from NATO toward Russia, Erdogan said: “Turkey is a very important partner in the Europe-trans-Atlantic alliance and it will remain so.”

“In the 21st century, expecting countries to limit their relations to few countries is obviously not realistic,'' he said.

“We aim to conclude an EPA within this year with a win-win mentality that will help meet the deficit in trade which Turkey is running against,” he said.

The Turkish president also stressed that Turkey has a full resolve to deepen cooperation with Japan on energy.

On Turkey’s fight against terrorism, Erdogan underlined that Turkey is showing the “most serious and realistic” struggle against terror organizations like PYD/YPG, PKK and Daesh, which find areas of movement in Iraq and Syria.

“Turkey will keep the title of the country that pursues the most serious struggle with terror organizations without any discrimination,” he added.

In its more than 30-year terror campaign against Turkey, the PKK -- listed as a terrorist organization by Turkey, the U.S. and the EU -- has been responsible for the deaths of nearly 40,000 people, including women and children.

The PYD/YPG is its Syrian branch, which also works under the label of the SDF.

Highlighting Turkey’s efforts with Russia and Iran for establishing regional peace, Erdogan said: “We have reached serious success in both averting civilian losses and progressing on a path for a political solution by implementing de-escalation zones.”

“We avoided hundreds of thousands of people leaving their homes in Idlib and migrating to our country and Europe,” he said.

Keywords:
SothebySothebys Contemporary Art Evening AuctionContemporary Art
Your comment has been forwarded to the administrator for approval.×
Warning! Will constitute a criminal offense, illegal, threatening, offensive, insulting and swearing, derogatory, defamatory, vulgar, pornographic, indecent, personality rights, damaging or similar nature in the nature of all kinds of financial content, legal, criminal and administrative responsibility for the content of the sender member / members are belong.
Related News