Trump accepts US presidency transition to Biden must begin

Donald Trump has accepted a formal US transition should begin for President-elect Joe Biden to take office. 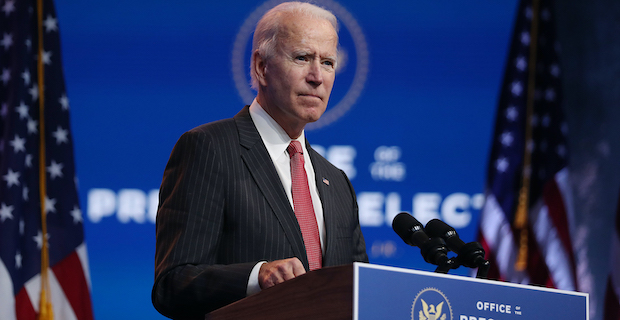 The president said the federal agency overseeing the handover must "do what needs to be done", even as he vowed to keep contesting his election defeat. The General Services Administration (GSA) said it was acknowledging Mr Biden as the "apparent winner". It came as Mr Biden's victory in the state of Michigan was officially certified, a major blow to Mr Trump. The GSA announcement means the president-elect now has access to top security briefings, office space and government officials as he prepares to take office on 20 January. His transition website has now changed to a US government domain. He will begin announcing the people he wants in the top jobs in his cabinet on Tuesday.

How did the Biden team respond?

It welcomed the start of the transition process as the Democratic president-elect gears up to be sworn in. "Today's decision is a needed step to begin tackling the challenges facing our nation, including getting the pandemic under control and our economy back on track," a team statement said. Earlier, Mr Biden unveiled his nominations for his foreign policy and national security team, consisting of old colleagues from his years in the Obama administration. He is set to appoint Anthony Blinken as secretary of state and John Kerry as climate envoy, while Janet Yellen is tipped to be the first female US treasury secretary.  The list of selections came ahead of a formal announcement Tuesday. Most of the appointments will require Senate confirmation.

Mr Trump tweeted as the GSA, which is tasked with formally beginning presidential changeovers, informed the Biden camp that it would start the transition process. GSA administrator Emily Murphy said she was making $6.3m (£4.7m) in funds available to the president-elect. Mr Trump said: "In the best interest of our Country, I am recommending that Emily and her team do what needs to be done with regard to initial protocols, and have told my team to do the same." He did not concede, however, and went on to repeat unsubstantiated claims of corruption, pledging to keep up the "good fight". It is worth noting that Mr Trump does not have to concede for Mr Biden to be sworn in as the 46th US president.

Keywords:
Donald TrumpJoe Biden
Your comment has been forwarded to the administrator for approval.×
Warning! Will constitute a criminal offense, illegal, threatening, offensive, insulting and swearing, derogatory, defamatory, vulgar, pornographic, indecent, personality rights, damaging or similar nature in the nature of all kinds of financial content, legal, criminal and administrative responsibility for the content of the sender member / members are belong.
Related News