Six tourists have been killed and at least 30 other people injured in a violent storm that swept across a region of northern Greece. 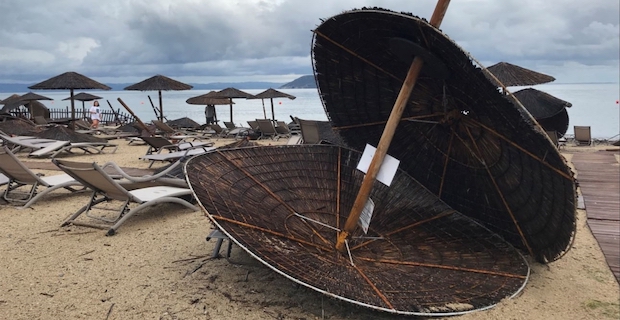 Gale-force winds, heavy rain and hailstorms lashed Halkidiki, near the city of Thessaloniki, late on Wednesday, officials say. A Czech couple died when their caravan was blown away, and two Romanians and two Russians were also killed. A state of emergency was declared and more than 100 rescue workers deployed. Charalambos Steriadis, head of civil protection in northern Greece, described it as an "unprecedented phenomenon". The storm followed a spell of very hot weather in Greece with temperatures soaring to 37C (98F) over the past two days.

Emily Kishtoo, from Surrey in the UK, was at a beach party with her family when the storm hit on Wednesday night. 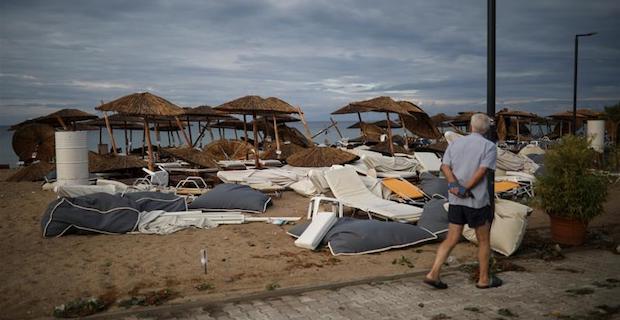 "It literally came out of nowhere," she told the BBC.

"The lights cut out on the beach that we were in - it was chaos. People running, screaming and just trying to basically get off the beach."

She says staff at the resort she was staying with her children, aged three and five, directed the family to a bar area - which then began to flood.

Electricity access at the resort has been intermittent since, she said, with no running water on Thursday morning.

A witness quoted by broadcaster ERT said the freak storm had lasted only for about 20 minutes. 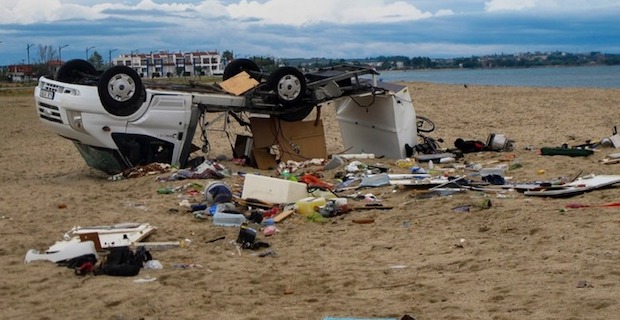 The Romanian woman and her child were killed when the roof of a restaurant collapsed at Nea Plagia, officials say, while the Russian man and his son were killed by a falling tree near their hotel in the seaside resort of Potidea.

"It is the first time in my 25-year career that I have lived through something like this," said Athansios Kaltsas, director of the Nea Moudania Medical Centre which treated many of the injured.

Greece's minister for citizen protection, Michalis Chryssohoidis, is due to visit the region on Thursday.

This is the latest in a series of other extreme weather events across Europe in recent weeks. A heat-wave brought record June temperatures to several countries.

Golf ball-sized hail has been reported in parts of the south of France and Italy and there were forest fires in Sicily on Wednesday, including in popular beach resort areas.

Keywords:
GreeceGreece StormNorthern GreeceHalkidiki Storm
Your comment has been forwarded to the administrator for approval.×
Warning! Will constitute a criminal offense, illegal, threatening, offensive, insulting and swearing, derogatory, defamatory, vulgar, pornographic, indecent, personality rights, damaging or similar nature in the nature of all kinds of financial content, legal, criminal and administrative responsibility for the content of the sender member / members are belong.
Related News