The British health secretary said Monday that seven people were arrested after British special forces stormed an oil tanker off the Isle of Wight following a suspected hijacking on Sunday. 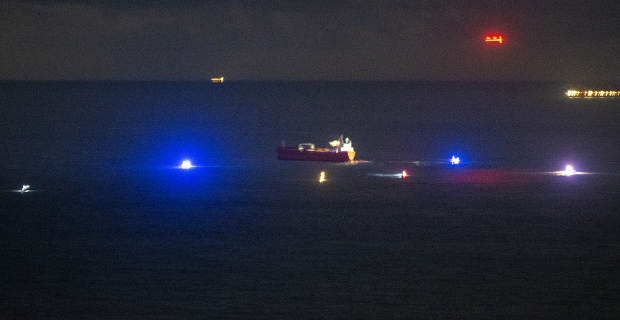 The British health secretary said Monday that seven people were arrested after British special forces stormed an oil tanker off the Isle of Wight following a suspected hijacking on Sunday.“I can confirm the crew are safe and the operation to secure the vessel concluded successfully,” Matt Hancock told Sky News on Monday. Hancock added: “I would like to pay tribute to the police and armed forces who did such an exemplary job … this is what they train for and this is what they're there for, to protect our country and they did that to such a high standard.”

The Liberian-registered tanker is called Nava Andromeda, and there were several stowaways, believed to be Nigerians seeking UK asylum.

The stowaways were handed over to Hampshire Police on Sunday night. All 22 crew members were safe, and the 228-meter tanker docked in Southampton.

The ordeal lasted 10 hours, and was brought to an end by sixteen members of the Special Boat Service, the elite counter-terrorism unit of the Royal Navy., with most of its members from Royal Marine Commandos.

The Defense Ministry said in a statement: “In response to a police request, the Defence Secretary and Home Secretary authorised Armed Forces personnel to board a ship in the English Channel to safeguard life and secure a ship that was subject to suspected hijacking.

“Armed forces have gained control of the ship and seven individuals have been detained. Police investigations will now continue. Initial reports confirm the crew are safe and well.”

Hampshire Police said in a statement: “At 10.04 am today concerns were raised to police for the welfare of crew onboard the vessel, which was situated approximately six miles off the coast of Bembridge.

“The vessel had been traveling in the direction of Southampton, having sailed from Lagos in Nigeria. It was reported that a number of stowaways were onboard, and they had made threats towards the crew.

“Following a multi-agency response by police, with support from the military and other emergency service partners, seven people were detained by police.”

Navios Tankers Management, who operate the ship, said in a statement that the stowaways had “illegally boarded” the ship in Lagos, Nigeria.

The statement added that the ship’s master became “concerned for the safety of the crew due to the increasingly hostile behaviour of the stowaways”.

They thanked the UK authorities “for their timely and professional response,” and paid “tribute to the master of the Nave Andromeda for his exemplary response and calmness and to all the crew for their fortitude in a difficult situation”.

Keywords:
Suspected HijackingIsle Of WightOil TankerBritish Special Forces
Your comment has been forwarded to the administrator for approval.×
Warning! Will constitute a criminal offense, illegal, threatening, offensive, insulting and swearing, derogatory, defamatory, vulgar, pornographic, indecent, personality rights, damaging or similar nature in the nature of all kinds of financial content, legal, criminal and administrative responsibility for the content of the sender member / members are belong.
Related News