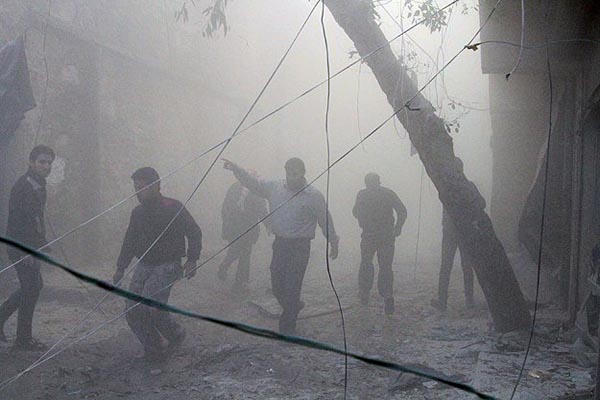 Local Coordination Committees (LCC) of Syria reported that a regime helicopter carried out an air strike on a market square of the opposition-controlled Tariq-Al-Bab district of Aleppo. The wave of barrel bombs left 35 people dead, tens of people wounded, LCC said. A video posted on the Internet by local activist group Insaan Rights Watch showed residents pulling mangled corpses out of scorched and twisted car frames. One road hit by the strike was covered with debris from nearby buildings and was lined with bodies, as young men shouted for cars to help transport the wounded. The content of the video could not be independently verified. Hundreds of people have been killed by air raids around the city of Aleppo in recent weeks, scores of them women and children, according to the Syrian Observatory for Human Rights, a pro-opposition monitoring group based in Britain.

Human rights groups and the United States have condemned the use of the improvised bombs - oil drums or cylinders which are packed with explosives and metal fragments, often rolled out of an aircraft's cargo bay. They say it is an indiscriminate form of bombardment.

President Bashar al-Assad's forces have been regaining territory southeast of Aleppo in recent weeks and have made gains in suburbs around the capital Damascus as well.

The move is likely an attempt to strengthen Assad's position against the opposition ahead of planned peace negotiations in Geneva next month.

An army ambush in the Qalamoun mountains north of the capital killed at least 60 people on Friday. The Observatory said the dead were rebels. But the Syrian National Coalition, an umbrella group representing the opposition abroad, said the dead were civilians.

More than 100,000 people have been killed in almost three years of conflict in Syria and over two million Syrians are now registered as refugees in neighboring countries, Turkey, Lebanon and Iraq, according to the UN.