UNSC veto power, could move to stop a resolution entailing any sanctions against the Syrian regime 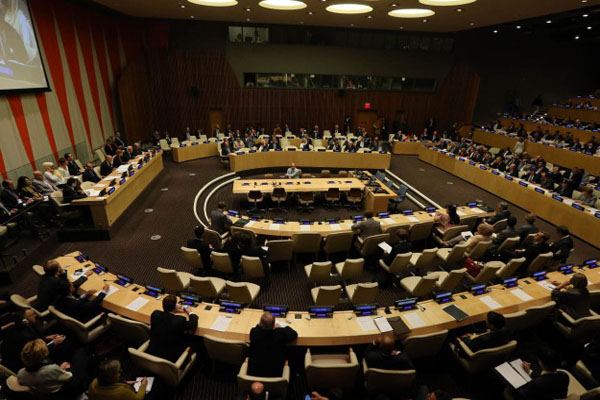 An aide to Syrian opposition leader Ahmed Jarba said that the Syrian opposition consider taking the regime to the UN Security Council if the Geneva II peace talks failed to produce an agreement to put an end to the country's three-year conflict.

Fayez Sarrah told Anadolu Agency via phone that according to last September's UNSC resolution mandating the Geneva talks, the party who hinders the negotiations would be subject to chapter IIV of the UNSC charter which allows the UN body to authorize military and non-military action.

"The [UNSC] resolution stipulated that the Geneva II convention work towards establishing a transitional government by members of the opposition and some members of the Syrian regime who have no blood on their hands," Sarrah said.

"We are open to this solution so if the [Syrian regime] rejects it then they will be responsible for the impasse."

Sarrah went on to acknowledge the possibility that Russia, a regime ally which holds a UNSC veto power, could move to stop a resolution entailing any sanctions against the Syrian regime.

"Russia agreed on the purpose of Genava II," Sarrah said, "It would then have to choose between sticking to its international commitments or bear the political and moral responsibility of supporting the Assad regime."

On Saturday, the last day for the second round of talks, UN Mediator Lakhdar Brahimi regretted that little had been accomplished in the talks and offered his condolences to the Syrian people.

Brahimi has not yet announced the date for the third round of talks.

Syria has been in the throes of conflict since 2011 when a peaceful uprising against President Bashar al-Assad escalated into civil war following a violent government crackdown.