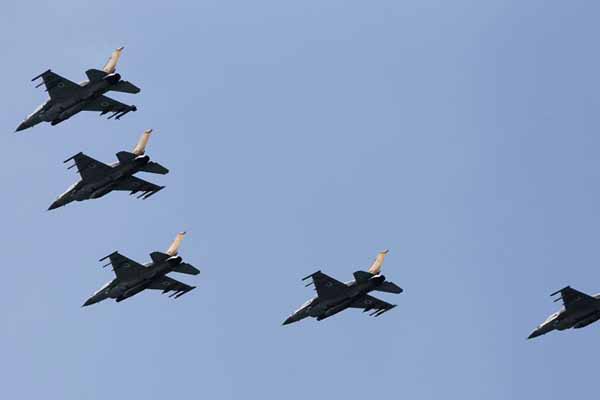 "Since the morning, the town of Qara has been hit by air strikes. Warplanes bombarded the town heavily yesterday. Regime troops are trying to storm it and to drive the rebels out," said Syrian Observatory for Human Rights director Rami Abdel Rahman. The Britain-based group also said the opposition fighters in the town were determined to resist despite the pressure. Pro-regime newspaper Al-Watan said "the army hit the Qalamoun mountains hard, closing in on the terrorists around Qara," using the government's term for the rebels. Violence in the Qalamoun area has intensified since Friday. Both the regime backed by Lebanese Shiite Hezbollah fighters and rebels, including Al-Qaeda-affiliated jihadists, have escalated their presence in the area. Qalamoun, home to a strong rebel presence, is strategic because it borders Lebanon and because the opposition uses it as a rear base for its operations around the capital. For President Bashar al-Assad's regime, it is important because it is on the road linking Damascus to the central province of Homs. It is also home to weapons depots. After months of being largely spared the violence tearing apart other areas of Syria, parts of Qalamoun have faced nearly-daily shelling in recent weeks. On Saturday, the Lebanese authorities said 1,200 families had fled Syria for the border town of Arsal, in eastern Lebanon. Most of them had come from Qara.

On Sunday, Arsal's municipality chief Ali al-Hojairi told AFP that "more refugees are arriving. Many are sleeping in cars. They need shelter." More than 800,000 Syrians fleeing their country's brutal war have taken refuge in Lebanon. Many suffer terrible shortages as the local authorities and international agencies struggle to provide for them.

In Damascus, the air force bombarded Barzeh, much of which is in rebel hands.