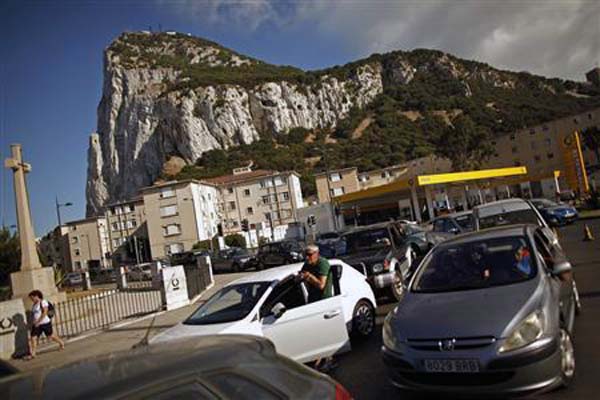 Tensions over Gibraltar - a British overseas territory to which Spain lays claim - flared up this month after Spain complained that an artificial reef being built by Gibraltar would block its fishing vessels. "I hope that this doesn't go any further, but it's clear that Spain has to defend its national interest and that's what we're going to do," Rajoy told reporters after a meeting with Spain's King Juan Carlos in Mallorca. Among the measures under consideration were a 50-euro (43.20 pounds) fee for people entering or exiting Gibraltar, tax investigations of Gibraltarians with property in Spain, and restrictions on use of Spanish airspace for flights heading to Gibraltar. It was not clear whether Spain would charge workers who cross into Gibraltar daily - which could cost them up to 500 euros a week - or only tourists, or indeed if such a levy had any legal basis. The recent war of words over Gibraltar has been more heated than similar tiffs in the past. Opposition politicians have accused Rajoy of using the situation to distract Spaniards from the country's severe recession and a corruption scandal that has damaged the credibility of his conservative party. British Prime Minister David Cameron and Rajoy spoke on Wednesday to try to defuse the conflict but both sides seemed reluctant to back down from their public positions.

Rajoy played down a scheduled visit by British navy vessels to Gibraltar in the coming weeks, saying it was routine and had been planned well ahead of time.

Spain ceded Gibraltar to Britain in the Treaty of Utrecht 300 years ago. The tiny rocky promontory near the southern tip of the Iberian Peninsula has some 30,000 residents who live off tourism, on-line gambling operations and financial services.

Friction over Gibraltar has ebbed and flowed over the centuries. Spanish dictator Francisco Franco sealed the land border for years, forcing the British enclave to get supplies from across the Strait of Gibraltar in Morocco.

The latest dispute arose after Gibraltar sank a number of concrete blocks into a bay to extend an artificial reef it says is aimed at fostering fish populations.

Even though Spain has built many similar artificial reefs along its coastline, Rajoy's government accused Gibraltar of causing ecological damage and restricting Spanish fishing boats.

In protest, Spain imposed a "go slow" policy at the border crossing, carrying out thorough checks on vehicles both leaving and entering Gibraltar, causing long queues in the summer heat.

Previously, Spanish police would check some incoming cars for smuggling - particularly for cigarettes from lower-tax Gibraltar - either randomly or based on concrete suspicion, while letting other vehicles pass without delay.

Now, nearly every car is examined and others are forced to wait until an inspection is finished. Britain has criticised the new border controls as excessive.

Spanish Foreign Minister Jose Manuel Garcia-Margallo spoke with his British counterpart on Wednesday and said they agreed to set up working groups on issues such as fishing. But Gibraltarian authorities said no working groups had been agreed, clouding the diplomatic prospects.

Rajoy said any talks must be four-way, involving Spain, Britain, Gibraltar and Andalusia, the Spanish region that abuts Gibraltar and is home to many workers who cross the border into the British territory every day.