Solidarity with Palestine displayed in street art in Belfast 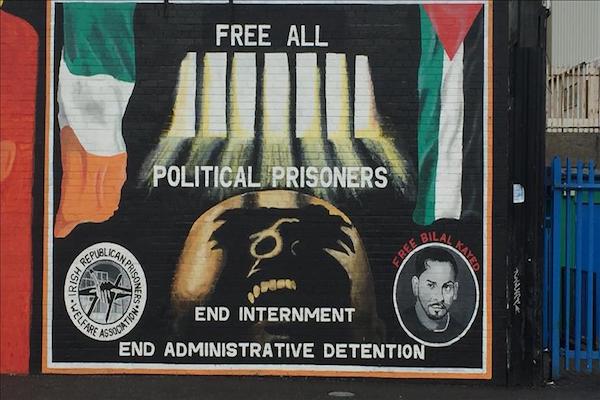 The tragedy of Northern Ireland’s 30-year conflict is obvious to even the most casual of visitors to the region’s capital -- it is daubed on the walls of end-of-terrace houses in huge murals that dominate parts of the city.

The murals, which can be found in both the Catholic nationalist and Protestant unionist neighborhoods of Belfast, are often tribute to young men killed during The Troubles, as the conflict is usually called, or to the militant groups involved.

Until the 1998 Good Friday agreement that largely brought an end to the violence, more than 3,600 people were killed as militants on both sides of the divide tried to bomb and shoot the other into submission.

Now, the murals, which once served to inspire pride or hatred, are a staple feature of open-top bus tours of the city.

However, some of the nationalist paintings reach beyond the borders of Northern Ireland to emphasis common cause with liberation movements on the other side of the world, particularly the Palestinian cause.

The Provisional Irish Republican Army -- the largest nationalist militant group -- came into existence in the late 1960s, when groups such as the Palestinian Liberation Organization were coming to prominence.

One mural shows two arms -- one clad in the colors of the Irish Tricolor and the other in the black, white and red of the Palestinian flag -- reaching through bars to clasp each other.

The legend “Solidarity POWs” stresses the ties between Irish nationalist and Palestinian prisoners.

Another Falls Road mural calls for the release of all political prisoners across the world and demands freedom for Palestinian prisoner Bilal Kayed, who was released in December 2016 after 15 years of captivity.

“Catholics stand by Palestinians as they see them oppressed by Israel, just like the Irish nationalists were oppressed here,” Anwar Mady, coordinator and imam at the Belfast Islamic Center, told Anadolu Agency ahead of this week’s Israeli Apartheid Week, which is being held by the Dublin-based Ireland Palestine Solidarity Campaign for the 13th time.

Support for the Palestinian cause is not restricted to Belfast. In Derry, the Free Derry sign that declares “You are now entering Free Derry” has in the past been painted in the colors of the Palestinian flag.

According to Mady, the sight of Palestinian colors is common in nationalist areas.

“Six thousand Muslims live in Northern Ireland, according to official figures, but the figure is indeed around 10,000 due to people residing on different types of visas, such as students’ visas,” he said.

He added that Muslims in Northern Ireland are not targeted by Islamophobia to the same degree as in other parts of the U.K.

However, he added: “There is a problem of a lack of information about Muslims and Islam. One of our projects is a 30-minute documentary on Muslims in Northern Ireland.

“This will provide some basic information and basic insight about how Muslim families live in this country.”