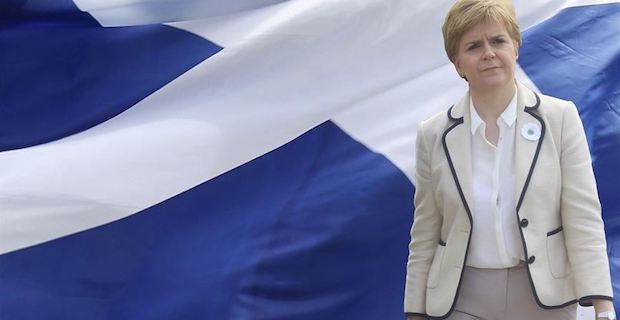 Scotland’s First Minister Nicola Sturgeon, who has repeatedly said her country would not be “dragged out of the EU against our will”, requested a section 30 order -- an order that would make possible to hold a new independence referendum (indyref2) -- but her request was rejected by British Prime Minister Boris Johnson.

Johnson said in a recent letter to Sturgeon that he would "not agree to any request for a transfer of power that would lead to further independence referendums".

Sturgeon’s Scottish National Party (SNP) says the material of the argument for a new vote has changed with Brexit and its effects on Scotland.

Sturgeon now is scheduled to set out the "next steps" in the "campaign to secure Scotland's future as an independent nation" on Friday.

However, Scottish Secretary Alister Jack said the U.K. government’s position on transferring the powers to the local Scottish government hold a second referendum “remains the same".

"A generation, as was in their independence white paper, has not passed,” Jack said, speaking to BBC.

“We're leaving the EU on Friday and we need to focus on the common fisheries policy, our coastal communities, our trade deals, all the good things we can do rather than another year of referendums, rancour and division."

The first referendum that asked Scottish voters whether they would want to break free from the U.K. was held in 2014, a mere two years before the historic EU referendum.

The government under then-Prime Minister David Cameron pledged better understanding for Scots from Westminster and "extensive new powers" for the Scottish Parliament.

The SNP, the party led the independence campaign, had full confidence that the country would survive and even be better off outside the U.K., strengthened by the nation’s oil fields in the North Sea, world-famous malt whiskey, textile, jet engines, and various banking and financial services.

But Scots rejected separation from the rest of the U.K., as just over 2 million votes (55.3%) were cast to remain part of the kingdom, while 1.62 million (44.7%) people voted for independence.

Johnson and the Scottish Tories have repeatedly rejected the idea of indyref2 -- as the possible vote has become known -- calling the 2014 referendum a “once in a lifetime” event that proved Scots prefer the union.

Keywords:
Scottish ParliamentIndependence
Your comment has been forwarded to the administrator for approval.×
Warning! Will constitute a criminal offense, illegal, threatening, offensive, insulting and swearing, derogatory, defamatory, vulgar, pornographic, indecent, personality rights, damaging or similar nature in the nature of all kinds of financial content, legal, criminal and administrative responsibility for the content of the sender member / members are belong.
Related News