Russia has sent warships from its Pacific Fleet to the Mediterranean for the first time in decades. 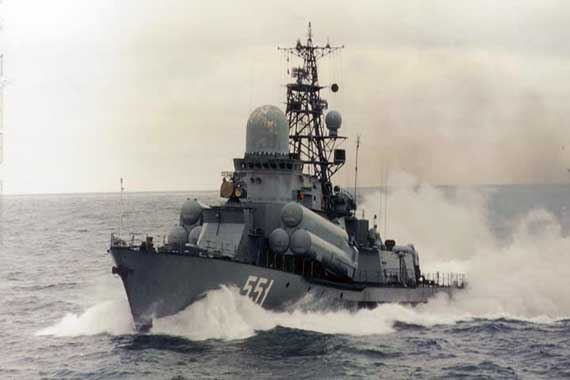 Aiming to build up a permanent fleet in the region, Russia has sent warships from its Pacific Fleet to the Mediterranean for the first time in decades.  The vessels, including the destroyer Admiral Panteleyev, two amphibious warfare ships, the Peresvet and the Admiral Nevelskoi, as well as a tanker and a tugboat, have entered the Mediterranean and are currently heading to Cyprus to make a port call in Limassol, according to the Pacific Fleet’s spokesman.

“The task force has successfully passed through the Suez Channel and entered the Mediterranean. It is the first time in decades that Pacific Fleet warships are entering this region,” Capt. First Rank Roman Martov told RIA.

The ships left the Far Eastern port city of Vladivostok on March 19 to join Russia’s Mediterranean task force, which currently consists of vessels from the Northern, Baltic, and the Black Sea Fleets, including a large anti-submarine ship, a frigate and a Ropucha-II Class landing ship, Russia Today has reported.

Russian Navy Commander Adm. Viktor Chirkov on May 12 announced plans for the Mediterranean task force and said it may “possibly” be enlarged to include nuclear submarines.

“Overall, already from this year, we plan to have five or six warships and support vessels [in the Mediterranean Sea], which will be replaced on a rotating basis from each of the fleets – the Black Sea, Baltic, Northern and, in some cases, even the Pacific Fleet. Depending on the scope of assignments and their complexity, the number of warships in the task force may be increased,” Chirkov said according to RIA.

Russian submarines may be deployed in the region “in perspective,” the Navy commander said, noting that both nuclear and diesel submarines had been present in the Soviet Union’s 5th Mediterranean Squadron.

"Everything will depend on the situation,” Chirkov said, also leaving the door open for missions in the Atlantic and Indian Oceans. The task force will be “comprehensively trained” to meet situations that may arise in these regions too, he said.

The permanent fleet’s headquarters will be set up in summer 2013, although their actual location is yet to be announced.

In a separate Agence France-Presse report, Russia’s foreign minister said May 17 he did not understand the international uproar created by Moscow’s continuing weapons cooperation with the government of Syrian President Bashar al-Assad.

“I do not understand why the media is trying to create a sensation out of this,” said Sergei Lavrov. “We have not hidden that we supply weapons to Syria under signed contracts, without violating any international agreements, or our own legislation.”

“The transfer of arms to Syria is clearly not positive and does not contribute to the stability of the region,” Livni said after meeting German Foreign Minister Guido Westerwelle, who is on a visit to Israel, in Tel Aviv.