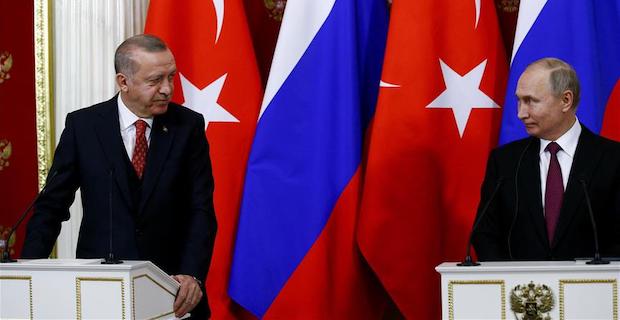 The media also saw the meeting date of Jan. 23 “symbolic”, as it is considered the “birth date" of the talks between Turkey, Russia and Iran in the format of Astana in the Kazakh capital on Jan. 23-24, 2017.

Daily Kommersant, which published an article penned by Erdogan titled "Turkey-Russia cooperation, critical for resolving the crisis in Syria" prior to his visit to Russia, noted the two leaders’ resolute stance in solving Syria crisis.

“The talks in the Kremlin confirmed the determination of Moscow and Ankara to play a key role in achieving peace in Syria while the U.S. is wrapping their presence up there. Iran should become the third guarantor of the Syrian settlement,” the daily said.

The Russian daily Izvestia wrote that three main questions are to be decided about Syria for three guarantor-countries; implementation of the agreements on Idlib, the situation on the ground after the U.S. troops Syria withdrawal and launch of work of the Syrian constitutional committee.

All the issues need time to be solved, but the leaders demonstrate determination in achieving the goals, it said.

In an article titled “Dialogue goes according to plan”, the state-run daily Rossiyskaya Gazeta stressed that the two presidents maintain an intensive dialogue which results in a high efficiency in Russian-Turkish cooperation.

“The presidents of Russia and Turkey are in an intensive political dialogue. Only last year, Putin and Erdogan held eight meetings and eighteen phone talks. The press service of the Kremlin notes that in the course of communication between the two leaders, the Syrian issue has always occupied an important place,” it said.

Keywords:
Vladimir PutinRecep Tayyip ErdoganTurkish President Recep Tayyip ErdoganRussian Media
Your comment has been forwarded to the administrator for approval.×
Warning! Will constitute a criminal offense, illegal, threatening, offensive, insulting and swearing, derogatory, defamatory, vulgar, pornographic, indecent, personality rights, damaging or similar nature in the nature of all kinds of financial content, legal, criminal and administrative responsibility for the content of the sender member / members are belong.
Related News