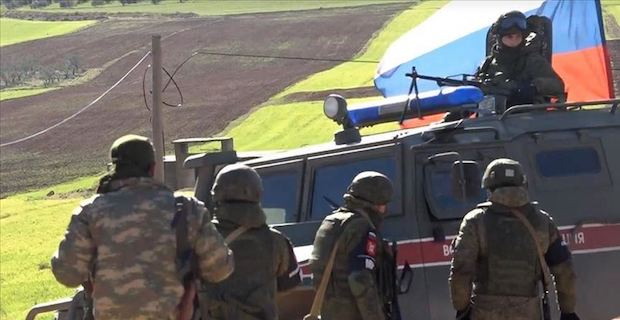 Russian military police carried out their first patrol in northern Syria Wednesday under a deal between Ankara and Moscow that requires PKK/YPG terrorists to withdraw from a planned safe zone. "In accordance with the memorandum of the deal that was signed between Turkey and Russia in Sochi on Oct. 22, today, Russian military police patrolled the designated route in northern Syria for the first time," Russia’s Defense Ministry said in a statement.

Ankara agreed with Washington on Oct. 17 to pause its operation to allow YPG/PKK terrorists to withdraw from the planned zone.

On Tuesday, Turkish President Recep Tayyip Erdogan and his Russian counterpart Vladimir Putin held a "historic" meeting in the Black Sea resort town of Sochi just hours before the pause was set to expire.

Ankara and Moscow reached a deal under which PKK/YPG terrorists will pull back 30 kilometers (19 miles) from Turkey’s border with northern Syria within 150 hours and security forces from Turkey and Russia will conduct joint patrols there.

In its more than 30-year terror campaign against Turkey, the PKK -- listed as a terrorist organization by Turkey, the U.S. and the European Union -- has been responsible for deaths of 40,000 people, including women, children and infants. The YPG is the Syrian offshoot of the PKK.

Keywords:
SyriaRussian ForcesNorthern Syria
Your comment has been forwarded to the administrator for approval.×
Warning! Will constitute a criminal offense, illegal, threatening, offensive, insulting and swearing, derogatory, defamatory, vulgar, pornographic, indecent, personality rights, damaging or similar nature in the nature of all kinds of financial content, legal, criminal and administrative responsibility for the content of the sender member / members are belong.
Related News