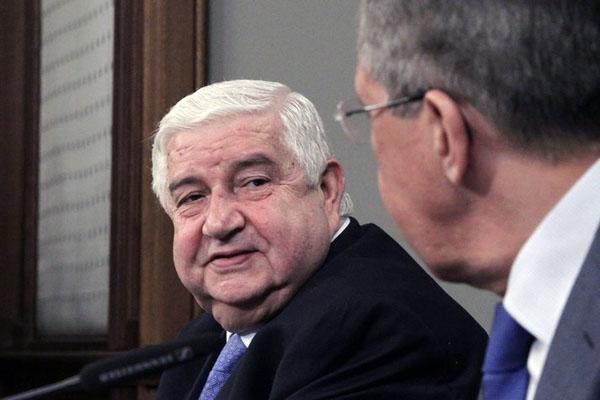 Russia and Syria urged the United States on Monday to focus on convening a peace conference to end more than two years of conflict instead of taking military action against Damascus. After talks between the countries' foreign ministers in Moscow, Syrian Foreign Minister Walid al-Moualem suggested a chemical attack which Washington blames on President Bashar al-Assad was a pretext to encourage military intervention and asked whether President Barack Obama was backing terrorists. "We are in Moscow at a time when the war drums are being beaten, the war drums of the government of the United States," Syrian Foreign Minister Walid al-Moualem said before talks with Russian Foreign Minister Sergei Lavrov. With Obama seeking support from the U.S. Congress for military action to punish Syria for the Aug. 21 chemical weapons attack, Moualem said "the diplomatic channels to resolve this issue have not been exhausted".

Lavrov, whose country says it believes the attack was carried out by rebels, warned that U.S. strikes on Syria could lead to the spread of terrorism.

Moualem questioned U.S. motives in Syria and accused Obama of backing Islamist extremists, apparently drawing comparisons with the attacks on the United States on Sept. 11, 2001.

"We are asking ourselves how Obama can ... support those who in their time blew up the World Trade Center in New York," Moualem told the news conference with Lavrov after their talks.

At the start of the talks, Moualem conveyed President Bashar al-Assad's gratitude for support from Russian President Vladimir Putin, who pressed Russia's case against military strikes on Syria at a G20 summit attended by Obama in Russia last week.

Assad "ordered me to give President Putin his regards and express gratitude for the position taken before and after the G20," Moualem said.