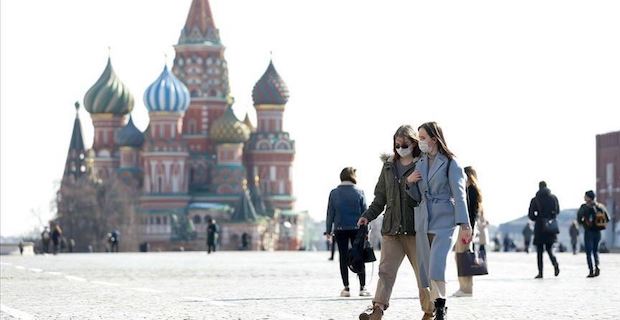 AVRUPA - Record high numbers of novel coronavirus cases and related deaths were reported in Russia on Tuesday, making the country the eighth hardest hit in the world by the pandemic. In a statement, the Russian emergency outbreak response team confirmed that 6,441 people tested positive for COVID-19 over the last 24 hours, bringing the overall number of cases to 93,558. Over the same time period, the death toll due to the virus rose to 867, with 72 more fatalities. Recoveries also increased to 8,458 after 1,110 more people were discharged from hospitals. In a separate statement, the Russian Health Ministry announced the start of clinical examinations of a drug for treatment of the novel coronavirus. The country has carried out more than 3.1 million tests, with over 192,000 people under medical surveillance due to suspected infection. Russia's Chief Sanitary Officer, Anna Popova, recommended expanding the quarantine measures until May 12 to maintain progress made in the fight against COVID-19.  Popova added that the end of the epidemic in Russia would only be in sight when the daily number of cases decreases to the hundreds. The virus has spread to 185 countries and regions since emerging in China last December. More than 3.04 million cases have been reported worldwide, with the death toll over 211,000, according to data compiled by the US-based Johns Hopkins University. Nearly 895,000 have recovered from the virus so far.

Keywords:
RussiaCOVID-19
Your comment has been forwarded to the administrator for approval.×
Warning! Will constitute a criminal offense, illegal, threatening, offensive, insulting and swearing, derogatory, defamatory, vulgar, pornographic, indecent, personality rights, damaging or similar nature in the nature of all kinds of financial content, legal, criminal and administrative responsibility for the content of the sender member / members are belong.
Related News