Putin vows asymmetrical reply to US missiles in Europe 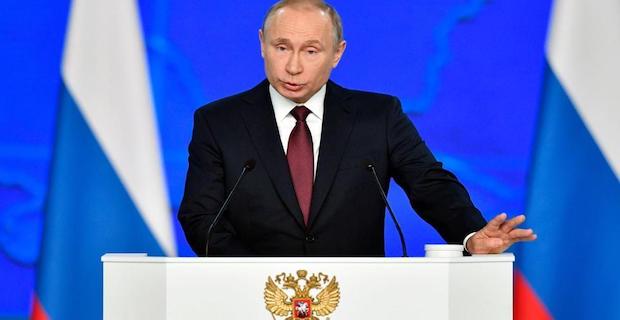 Addressing the Federal Assembly in Moscow, Putin said that the presence of U.S. missiles in Europe -- capable of striking Moscow in 10 minutes -- represented a threat to Russia’s security.

Russia, he added, would not be the first to deploy such missiles in Europe. But such a move by the U.S., Putin warned, would endanger international security.

“In this case, we will have to provide for… asymmetric measures,” he said.

“Russia will be forced to create and deploy weapons that can reach not only those territories from which we will have a direct threat,” he added, “but also those territories where there are decision-making centers for the use of missile systems that threaten us.”

Putin also announced the development of a new hypersonic missile -- the Zirkon -- capable of traveling at nine times the speed of sound and which can be launched from submarines.

Putin also hailed Moscow’s relations with Asian states, describing Russian-Chinese relations as "a stabilizing factor in world affairs" and referring to India as "a strategic and particularly privileged partner".

He also stressed his country’s desire to ink a peace treaty with Japan based on “mutually acceptable conditions”.

"We also intend to deepen our cooperation with the Association of Southeast Asian States," Putin asserted.

Moscow, he added, is now awaiting steps by the European Union aimed at the "restoration of normal political and economic cooperation".

Putin went on to describe the demographic crisis now facing Russia as "the country's key challenge".

He proposed several recommendations for resolving the crisis, including increased welfare payments to children, tax exemptions, and improvements to the public health system.

Keywords:
Russian President Vladimir PutinUS MissilesEderal Assembly
Your comment has been forwarded to the administrator for approval.×
Warning! Will constitute a criminal offense, illegal, threatening, offensive, insulting and swearing, derogatory, defamatory, vulgar, pornographic, indecent, personality rights, damaging or similar nature in the nature of all kinds of financial content, legal, criminal and administrative responsibility for the content of the sender member / members are belong.
Related News