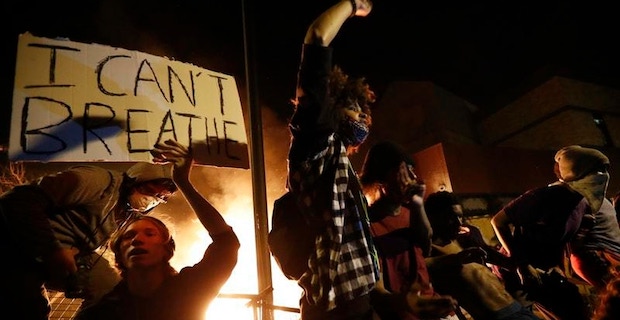 A fire broke out at the Minneapolis Police Department's 3rd Precinct building late Thursday amid protests over the death of George Floyd, an unarmed black man who died after being pinned down by a white police officer. Angry demonstrators stormed the building and could be seen in videos circulating on social media chanting "What's his name? George Floyd!" -- shouting the name of the man whose last words were "I can't breathe."  On the third day of the protests, police clashed with some demonstrators as peaceful rallies took place.  Minneapolis police abandoned the 3rd Precinct.

"In the interest of the safety of our personnel, the Minneapolis Police Department evacuated the 3rd Precinct of its staff," Minneapolis police said in a statement. "Protesters forcibly entered the building and have ignited several fires." The latest move came hours after Hennepin County Attorney Mike Freeman said he will not "rush" to charge the four officers involved in Floyd’s death on Monday. "That video is graphic and horrific and terrible, and no person should do that," Freeman said. "But my job in the end is to prove that he violated a criminal statute, and there's other evidence that does not support a criminal charge," he added, referring to the officer who had his knee on Floyd’s neck. 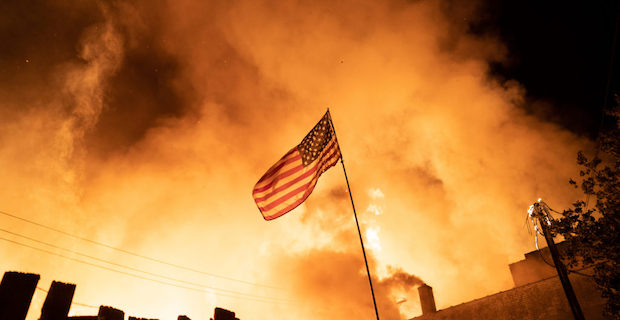 Separately, more than 500 National Guard soldiers have been activated to Minneapolis, St. Paul and surrounding communities. Minneapolis Mayor Jacob Frey also declared a local emergency Thursday night due to civil disturbances. Later, a video circulating on Twitter showed that military trucks arrived in Minneapolis. The authenticity of the video could not be confirmed.

Meanwhile, President Donald Trump said on Twitter that there was "a lack of leadership" in Minneapolis. "I can’t stand back & watch this happen to a great American City, Minneapolis. A total lack of leadership. Either the very weak Radical Left Mayor, Jacob Frey, get his act together and bring the City under control, or I will send in the National Guard & get the job done right....," Trump said.

"These THUGS are dishonoring the memory of George Floyd, and I won’t let that happen. Just spoke to Governor Tim Walz and told him that the Military is with him all the way. Any difficulty and we will assume control but, when the looting starts, the shooting starts. Thank you!," he added.

Floyd, 46, was arrested Monday in Minneapolis, Minnesota after reportedly attempting to use a counterfeit $20 bill at a local store.

Video footage on Facebook showed him handcuffed and cooperating.

But police claim he resisted arrest. One of the officers kneeled on his neck, despite Floyd’s repeated pleas of "I can't breathe."

Shortly after, Floyd appeared to lose consciousness, but the officer maintained his position on the victim.

He died shortly after being taken to a hospital.

Four officers have been fired over the killing, which sparked mass protests and an outcry against police brutality.

Floyd's family said they want the officers to be charged with murder.

Floyd's death has strong parallels to that of Eric Garner, who died during a fatal 2014 arrest in New York, repeatedly pleading with officers, "I can't breathe."

The phrase became a rallying point for protesters demonstrating against the killings of unarmed black men and women by police. It has continued to resonate nearly six years later.

Keywords:
PoliceUSMinneapolisGeorge Floyd
Your comment has been forwarded to the administrator for approval.×
Warning! Will constitute a criminal offense, illegal, threatening, offensive, insulting and swearing, derogatory, defamatory, vulgar, pornographic, indecent, personality rights, damaging or similar nature in the nature of all kinds of financial content, legal, criminal and administrative responsibility for the content of the sender member / members are belong.
Related News