Presidents of Turkey, Russia and Iran discussed Syria in Sochi

Iran and Russia had agreed on the future of Syria. 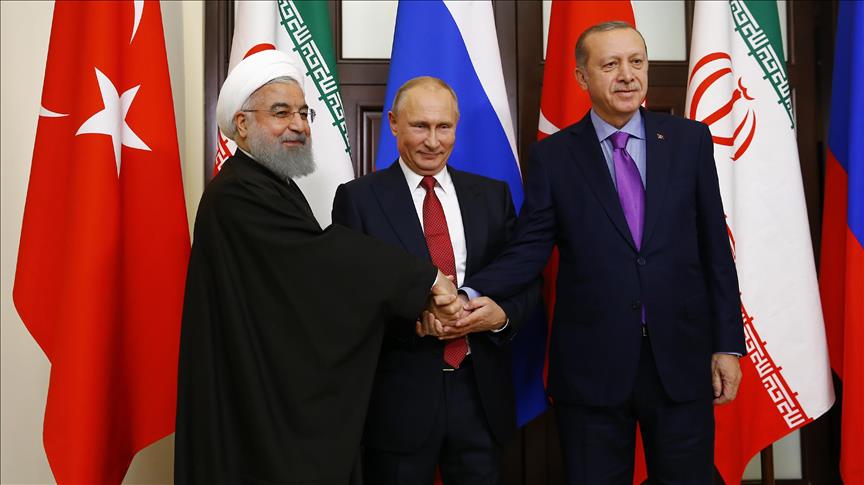 AvrupaLondon - A landmark meeting in Sochi between Turkey, Iran and Russia aimed at ending the Syrian conflict has received widespread media coverage in the Arab and Iranian press.

“President Recep Tayyip Erdogan, Vladimir Putin and Hasan Rouhani gather with the aim of resolving the six-year conflict in the Russian city of Sochi,” read the headline of Asharq al-Awsat newspaper.

"All parties should make concessions, including the Syrian regime; the [three] countries' foreign ministers and chiefs-of-staff have been tasked with setting a date for the Syria National Congress," the newspaper quoted Putin as saying.

Al-Hayat, a London-based newspaper published in Arabic, carried the headline: "Sochi Summit sets the stage for a political solution and dialogue".

According to Al-Hayat, the summit confirms that a “new era” has begun in the region following the defeat of the Daesh terrorist group.

Qatar-based daily Al-Arab, for its part, highlighted President Erdogan's speech at the meeting.

"There are dirty scenarios for demolishing the Islamic world," Erdogan said at a press conference.

Iranian newspapers, meanwhile, reported that Turkey, Iran and Russia had agreed on the future of Syria.

Iran’s Arman Daily pointed out that all three countries were “on the same page” vis-à-vis the Syrian conflict within the context of a "strategic alliance".

Iranian daily Cevan heavily covered the Sochi meeting, declaring: "There is stability without the U.S. in the region."

"Rouhani, Putin and Erdogan took steps towards establishing a new peace in the region during the Sochi talks," the paper asserted.

Ibtikrar Daily, meanwhile, bore the headline, "Stability Triangle in Syria", noting that Turkey, Iran and Russia had arrived at a mutual agreement in Sochi.