Egyptians spend long days preparing to welcome the holy fasting month of Ramadan, with special decorations across the streets and a shopping spree. 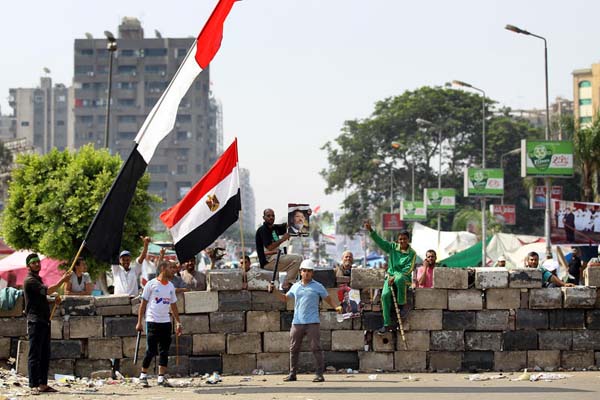 Every year Egyptians spend long days preparing to welcome the holy fasting month of Ramadan, with special decorations across the streets and a shopping spree. This year politics has hijacked the traditional Ramadan joy. "Ramadan is totally different this year," Ahmed Abdullah, a 24-year-old employee in a private business from the Met Oqba neighborhood of Giza. Traditional Ramadan decorations, including the trademark lantern and lights, are almost absent from most streets.

An official celebration ceremony to mark the sighting of the new moon, which singles the start of the dawn-to-dusk month, was cancelled this year for the first time ever.

Ramadan, the holiest month in Islamic calendar, starts in Egypt on Wednesday amid daily demonstrations by supporters and opponents of ousted president Morsi.

"We are now either glued to the television to follow up developments or in the squares to join the protests," notes Abdullah.

He recalls that in the past he used to join a childhood friend to decorate their street with the traditional Ramadan lantern and lights.

This year politics divided them.

"I go to Tahrir to join anti-Morsi protests, while my friend goes to the Nahda square to join Morsi loyalists,” he lamented.

The political turmoil and the bad economic situation in the most populous Arab country have had their toll on the usual Ramadan shopping spree, especially with respect to the trademark lantern.

"The demand for lantern is poor this year due to the current developments," Mustafa Abdel-Aziz, a lantern vendor in Dokki, said.

“Many of us were waiting for the Ramadan season,” he said, putting lantern prices at between 15 pounds to 65 pounds.

"But the protests have badly affected our business."