PKK/PYD have been accused of ethnic cleansing in northern Syria 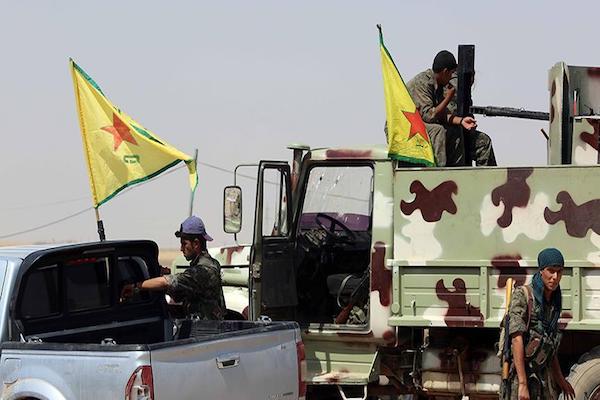 Speaking to Anadolu Agency Thursday, Kawa Azizi, a board member of Syria’s Kurdish National Council, said the PKK/PYD "kidnaps, imprisons, tortures, and kills people in the region" in the Syrian Kurdish region known as Rojava.

The PKK has been designated a terrorist organization by Turkey, the U.S., and the EU. Turkey considers the YPG and PYD as terror organizations too since they are offshoots of the PKK terror group.

More than 1,200 people, including security force personnel and civilians, have lost their lives since the PKK resumed its decades-old armed campaign in Turkey in July 2015.

"That shows the relationship between Assad and Daesh, proving that Assad founded Daesh and is using it for his benefit. They don’t even get into clashes by mistake or bomb each other.”

He said Assad got the upper hand in Damascus, Aleppo, Hamaa, Lazkiya, Tartus and some other Syrian districts "because of Daesh”.

"Assad left the Kurdish-populated regions to the PYD in his name. And all the other regions to Daesh. The opposition only holds Idlib for now," he added.

In an article published Tuesday, weekly U.S. magazine The Nation claimed that starting in 2013, the YPG terror group evicted thousands of Arabs from their homes at gunpoint, and afterwards blew up, torched or bulldozed their homes and villages.

The article "Have the Syrian Kurds Committed War Crimes?" -- based on a six-month investigation and interviews with nearly 80 individuals by writer Roy Gutman -- undermines the YPG’s claims to be leading "a democratic, open society" in the region.

As it continues to support the group in the field, the U.S. has said it considers the PKK/PYD terror group as "reliable partner" on the ground in Syria -- not a terrorist group -- but Gutman’s research tells a different story.

The article says that beginning in early 2014, Daesh forces in Rojava "unexpectedly" showed up with weapons, seizing territories and handing them over to the YPG terror group without a fight. This showed a “surprising pattern of seeming collaboration” between the YPG, Daesh, and the Assad regime, wrote Gutman.

"Afterward the YPG expelled the Arab residents," he wrote.

According to the article, the hostility between the YPG and Daesh terror groups "was feigned," with the YPG deserting locals who tried to defend their homes when Daesh attacked. The threats and fleeing residents paved the way for Kurds to flock to Turkey.

In the article, a defector from the PKK terror group identified as Mohar was asked if there is a YPG separate from the PKK.

"What’s the difference?" between the two, he was quoted as replying.

Although YPG representatives interviewed denied that any residents had been expelled, the article said, "Destruction and expulsions from villages took place after the YPG captured them from ISIS [Daesh] without a fight”.

Mohar also said the YPG gets orders from the PKK, and that it is the terrorist group’s ruling council and PKK terror group commanders make the decision to burn villages.

A report published in January 2016 by the London-based Syrian Network for Human Rights (SNHR) said that since the withdrawal of Syrian regime forces in 2012, forces of the PKK/PYD have committed significant human rights violations in northern and northeastern Syria -- including "ethnic cleansing massacres".

According to the report, the PKK/PYD has sought to ethnically cleanse majority-Arab towns under its control.

Three massacres that took place in the Al-Hasakah governorate, for example, resulted in the death of 91 civilians, including 17 children and seven women, the report said.

The report said that some YPG actions amount to war crimes and that non-Kurdish -- mostly Turkmen and Arab -- inhabitants of villages in the de facto autonomous Kurdish administration were forced out of their homes.

Speaking to Anadolu Agency, Serhat Erkmen, a Middle East specialist at central Anatolia’s Ahi Evran University, said the forced evacuations of Arab residents committed by the PKK/PYD and YPG in Syria's north "have been proven by previous reports”.

"The forced migrations were done before in Tal Abyad, Manbij, and Ras al-Ayn by the YPG and PYD, who tried to justify their cause by saying they are at war with Daesh," Erkmen said.

"After these reports, it would not be surprising if the forced migrations continued," said Erkmen.