Organisation for Security and Co-operation in Europe

Nick De Bois also updated; "It is a gathering of parliamentarians from as far as the US and Russia. we discussed matters of human rights, Syria, Cyber Security, freedom of speech" 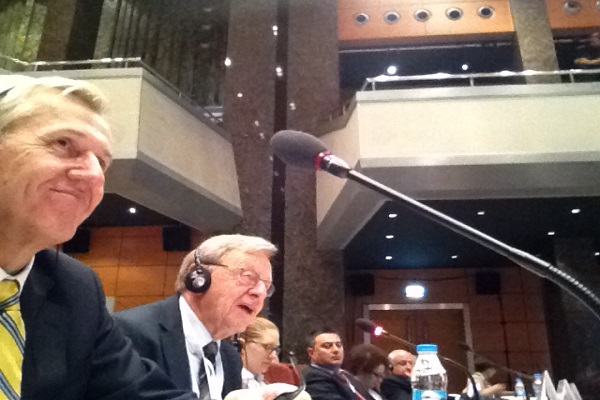 Nick De Bois, Conservatives Party Mp For Enfield North In Istanbul speaking today at the 22nd Annual Session of the OSCE Parliamentary Assembly, told parliamentarians from across the OSCE region that further efforts to strengthen trust and confidence among the states are needed.

Nick De Bois also updated; "This weekend I was in Istanbul for the Organisation for Security and Co-operation in Europe conference. It is a gathering of parliamentarians from as far as the US and Russia. With over 750 delegates we discussed matters of human rights, Syria, Cyber Security, freedom of speech and promoting civic society in new and emerging countries such as Azerbajhan."

"It was not lost on delegates that we were meeting less than half a mile from Taksim Square which had seen protests from Turkish citizens which had in its early stages been the scene  of violence of police against demonstrators. Fortunately as I write Taksim Square is still the centre of protests but in a calmer, but nonetheless impactful atmosphere. There is nevertheless a very high level of policing and water cannon vehicles surrounding the area."

Mp For Enfield North In Istanbul says; "I visited Taksim Square and spoke to protestors (and police) to understand what drives them to turn up and register their protest day after day, which by now has becomes about much more than the unpopular development of the park. When I was there protestors were campaigning on this particular day for Gay rights, others were there to protest against particular government proposals that they felt undermined the secular state as founded by Ataturk. All protestors admit however that they were still angry with the reaction of the state to the heavy handed reaction to the early protests. That unacceptable violence against the protestors has in some respects advanced Turkish freedom of speech and protestors feel empowered to voice their opinions with more confidence. I sense the government is beginning to see  that protests and demonstrations are an integral part of democracy."

" It is right that the police are now responding more proportionately and that the government recognise the protestors concerns as legitimate. However I am concerned by reports that lawyers acting in defence of protestors at the scene have been detained. It is not clear how many have been reeased. Care I hope will be taken on both sides to ensure that violence does not flare up again."

"The government will be keen to demonstrate that Turkey is still open for business and will be keen to re-assure investors that the country is a welcome place to do business. The reaction of the government to any legitimate concerns will be crucial in this respect and friends of Turkey, including the UK, want to see the continued growth and modernisation of the country and ultimately be ready to and welcomed into the EU."

"At the OSCE yesterday we discussed the challenges around the world in promoting democracy, freedom of expression and religion. That Turkey is hosting such an important conference and itself emerging as a modern, economically powerful democracy is to be welcomed, but as Taksim Square shows that journey for Turkey can be difficult at times as it has to embrace more moves towards even greater political freedom."

The 22nd Annual Session of the OSCE Parliamentary Assembly is being held in Istanbul, Turkey from 29 June to 3 July 2013.
Your comment has been forwarded to the administrator for approval.×
Warning! Will constitute a criminal offense, illegal, threatening, offensive, insulting and swearing, derogatory, defamatory, vulgar, pornographic, indecent, personality rights, damaging or similar nature in the nature of all kinds of financial content, legal, criminal and administrative responsibility for the content of the sender member / members are belong.
Related News