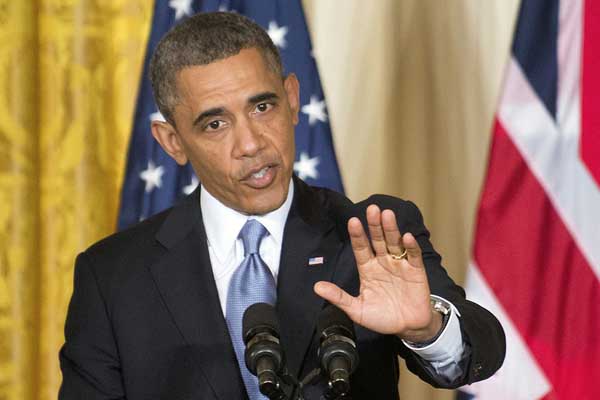 President Barack Obama said on Thursday he reserved the right to resort to both diplomatic and military options to pressure Syrian President Bashar al-Assad but insisted that U.S. action alone would not be enough to resolve the Syrian crisis.   "I don't think anybody in the region, including the (Turkish) prime minister, would think that US unilateral actions would bring about a better outcome inside of Syria," said Obama. Replying to the questions at the joint press conference with Turkish Prime Minister Recep Tayyip Erdogan, Obama said that Turkish and American militaries, intelligence and diplomatic personnel were constantly sharing information about the possibility of the use of chemical weapons inside of Syria. "But separate and apart from the chemical weapons," said Obama, "We know that tens of thousands of people are being killed with artillery and mortars and that the humanitarian crisis and the slaughter that's taking place, by itself, is sufficient to prompt strong international action." Stating that the two leaders have spoken extensively about the steps to be taken on humanitarian efforts, Obama emphasized on strengthening the opposition and mobilizing the entire international community to put more and more pressure on Assad to urge him to leave power to a political transitional institution.

US redlines on Syria

In response to a question regarding his past "Assad crossed the redline" statement, Obama said, "With respect to what I've said in the past around red lines, what I've said is that the use of chemical weapons are something that the civilized world has recognized should be out of bounds. And you know, as we gather more evidence and work together, my intention is to make sure that we're presenting everything that we know to the international community as an additional reason, an additional mechanism for the international community to put all the pressure that they can on the Assad regime and to work with the opposition to bring about that political transition."

Obama further stated that there were currently a whole range of options that the US was already engaged in, and that he preserved the options of taking additional steps, both diplomatic and military, as the chemical weapons inside of Syria also threatened the security of the US and its allies.

Obama added that Syria issue was an international problem, not something that the US could manage itself, and said, "I don't think anybody in the region, including the (Turkish) prime minister, would think that U.S. unilateral actions, in and of themselves, would bring about a better outcome inside of Syria."

Underlining that applying steady international pressure and strengthening the opposition was the only way to solution, Obama said, "I do think that the prospect of talks in Geneva involving the Russians and representatives about a serious political transition that all the parties can buy into may yield results."

Obama finally said that in the meantime, they were going to continue to deal with the humanitarian situation in close consultation with Turkey.