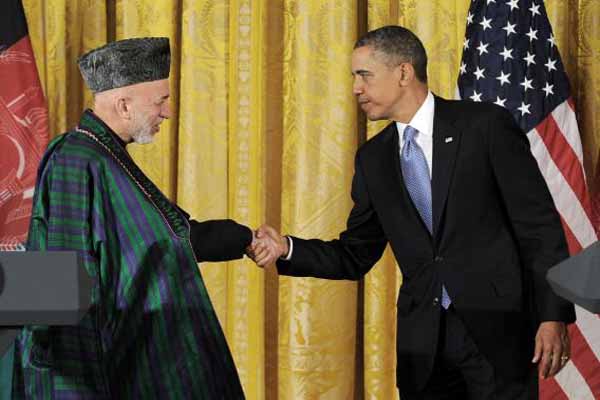 Doubts persist over the fate of planned peace talks with the Taliban, despite US President Barack Obama and his Afghan counterpart Hamid Karzai discussing ways to move forward the stalled negotiations. The two leaders held a video conference on Tuesday, hours after the armed Afghan group carried out an attack on the presidential compound and a United States CIA office in Kabul, resulting in at least three deaths. Though Washington claimed that both leaders reiterated their support for the Taliban's new political office, set up in the Gulf state of Qatar with a view to facilitate the talks, Karzai is understood to have held himself back from committing to the negotiations. Obama and Karzai "reaffirmed that an Afghan-led and Afghan-owned peace and reconciliation process is the surest way to end violence and ensure lasting stability in Afghanistan and the region", the White House said.

"And they reiterated their support for an office in Doha for the purpose of negotiations between the High Peace Council and authorised representatives of the Taliban," it said.

"The Afghan president was more circumspect in his announcement, saying that he and President Obama discussed a wide range of issues, including the [2014 presidential election], the bilateral security agreement with the United States and the security transition. He said that each side made their position known to each other," Al Jazeera's Jennifer Glasse reported from Kabul on Wednesday morning.