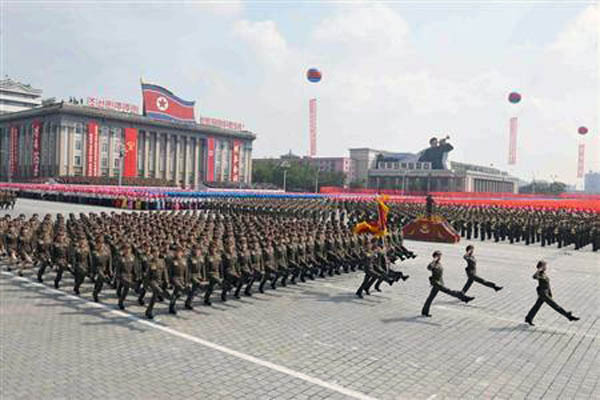 Reclusive North Korea has often issued threats to attack the South and the United States but has rarely turned them into action. Such hostile rhetoric is widely seen as a way to push its domestic and international political agenda. A spokesman for the North's military warned the United States of "disastrous consequences" for moving a group of ships, including an aircraft carrier, into a South Korean port. "In this connection, the units of all services and army corps level of the KPA received an emergency order from its supreme command to re-examine the operation plans already ratified by it and keep themselves fully ready to promptly launch operations anytime," the spokesman said, referring to the Korean People's Army (KPA). "The U.S. will be wholly accountable for the unexpected horrible disaster to be met by its imperialist aggression forces' nuclear strike means," the spokesman said in a statement carried by the official KCNA news agency. South Korea's Defense Minister Kim Kwan-jin said later on Tuesday there was no indication of unusual activity by the North's military. Washington brushed off the North's warning. "We've seen this type of rhetoric from North Korea before," State Department spokeswoman Jen Psaki said. "Such comments from North Korea will do nothing to end (its) isolation or reduce the costs (it) pays for defying the international community." In March, the North declared it was no longer bound by the armistice that ended fighting in the 1950-53 Korean War signed with the United States and China, and threatened to use nuclear weapons to attack U.S. and South Korean territories.

South Korea's defense ministry said the U.S. ships were taking part in a joint routine maritime search and rescue exercise with the South's navy and said any criticism by North Korea was "wrong".

The North has defied international warnings not to build nuclear and long-range missiles and is believed to have enough fissile material to build up to 10 nuclear bombs.

Most intelligence analysis says it has yet to master the technology to deploy such weapons.

The United States, which has 28,500 troops stationed in the South, regularly engages in drills with its ally, and has said the aircraft carrier USS George Washington was leading a group of ships to visit South Korea in a routine port call.

The impoverished North's large but ageing conventional military is considered unfit to fight an extended modern battle but it staged surprise attacks against the South in 2010 that killed 50 people in aggression unprecedented since the war.

An attempt at dialogue in August led to the reopening of a jointly run factory park that had been shut amid high tension in April. However, talks have since hit a stalemate.

North Korean leader Kim Jong-un has ordered his country's military to be on standby for combat, the head of the South's National Intelligence Service said in a report to parliament, according to Yonhap news agency.

The North also appears to have restarted its ageing nuclear reactor and conducted an engine test as part of its long-range missile program, spy chief Nam Jae-joon was quoted as saying, confirming recent private intelligence analysis.