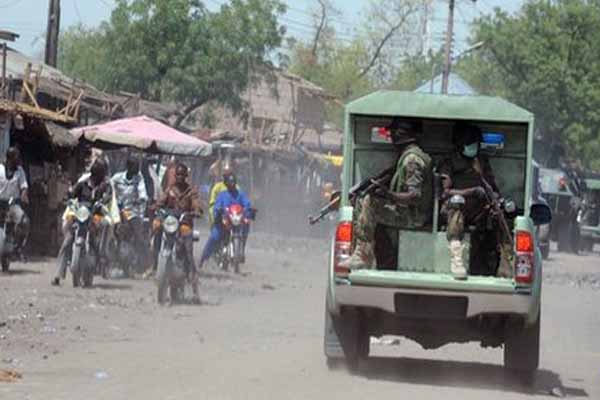 A statement said the drive was aimed at "asserting the nation's territorial integrity" and "enhancing security". On Tuesday President Goodluck Jonathan declared a state of emergency in three north-eastern states after a series of deadly attacks by militant groups.  Fighters from the Boko Haram group are blamed for most of the violence.  The group, which has its roots in north-eastern Nigeria, is linked to bloodshed in which some 2,000 people have died since 2010. Nigeria - a multi-ethnic nation of more than 160 million people - is also affected by a spate of conflicts over land, religion and oil.  Wednesday's Ministry of Defence statement said the army, police and other security agencies had begun operations to "rid the nation's border territories of terrorist bases and activities".

The declared aim that it will assert the nation's territorial integrity comes a day after the president said the state no longer controlled the entire territory of Nigeria - a somewhat embarrassing admission, says the BBC's Will Ross in Lagos.

The operation will focus on enhancing security of governmental structures after the president said attacks on government buildings and killings of officials and other civilians amounted to a declaration of war.

The "massive" new deployment of personnel and resources will add to an already significant security presence in the north-east, a day after a state of emergency was declared in three states - Borno, Adamawa, and Yobe.

The question, our correspondent says, is how the army will defeat the insurgents without causing enormous suffering for ordinary civilians, whom the militants live and operate among.

The statement assures "law-abiding citizens that every effort has been put in place to ensure safety of civilians and non-combatants", and urges citizens to alert authorities to "criminal and terrorist activities or movement".

The president recently said he was looking into the possibility of an amnesty for militants, but with the new military campaign, the prospect of dialogue looks more remote than ever, our correspondent says.

"We will hunt them down, we will fish them out, and we will bring them to justice," the president vowed on Tuesday.

Boko Haram, whose name means "Western education is forbidden" in the local Hausa language, is fighting to overthrow the government and create an Islamic state in the north.