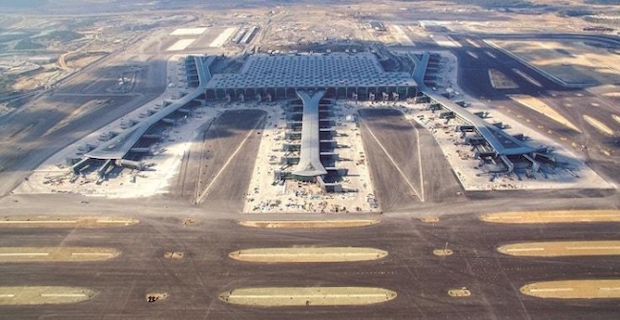 The opening ceremony of the first phase of one of the largest airports in the world will take place on Monday with the attendance of Turkish President Recep Tayyip Erdogan and several leaders from around the world.

The ceremony which will be broadcast live, will kick off at 4:30 p.m. local time (1330GMT) on the 95th anniversary of the Turkish Republic.

Over 50 foreign dignitaries from at least 18 countries including the Turkish Republic of Northern Cyprus, Macedonia, Moldova, Pakistan, Serbia, Sudan, Bosnia, Bulgaria, Democratic Republic of the Congo, Slovenia, Georgia, Iran, Moldova's Autonomous Territorial Unit of Gagauzia and the U.K. will attend the ceremony.

Built by a consortium of five contractors -- Limak, Kolin, Cengiz, Mapa and Kalyon, the project has been carried out through a build-operate-transfer model. It will provide over 26 billion euros ($30.65 billion) of revenue to the government.

Spread over an area of over 76 million square meters (818 square feet), the first phase of the airport will serve 90 million passengers.

With the remaining phases to be completed by 2023, the airport is to sport six separate runways with a capacity of 500 aircraft, an annual 200 million passengers and open and closed carparks for 70,000 cars.

It will be home to the world’s largest duty-free shopping complex. The 53,000 square meter shopping complex will consist of six sections, including luxury stores and bazaar concepts.

The airport’s maiden voyage will be to Turkey’s capital Ankara on Oct. 31, with the first international flight to the Turkish Republic of Northern Cyprus the following day. The first flight to Azerbaijan's capital Baku will be on Nov. 8.

It is expected that a daily 2,000 planes will go through the airport by the end of the year to over 350 destinations by over 250 carriers.

Keywords:
Recep Tayyip ErdoganNew Istanbul AirportTurkish Republic
Your comment has been forwarded to the administrator for approval.×
Warning! Will constitute a criminal offense, illegal, threatening, offensive, insulting and swearing, derogatory, defamatory, vulgar, pornographic, indecent, personality rights, damaging or similar nature in the nature of all kinds of financial content, legal, criminal and administrative responsibility for the content of the sender member / members are belong.
Related News