MY APPEAL TO THE AMERICAN PEOPLE

Erturk says, 'Someone for whom I have a lot respect a love – a senior friend of mine – has asked me to write this letter to you, the American People…' 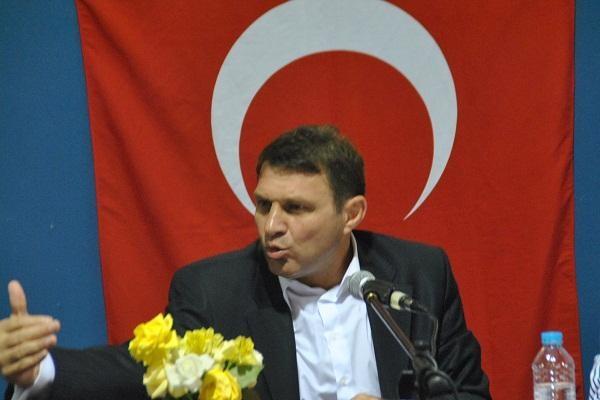 Ret. Turkish Admiral Turker Erturk says; "Someone for whom I have a lot respect a love – a senior friend of mine – has asked me to write this letter to you, the American People…"

"He is a businessman who has done business with you for years in the past and is still full of positive energy and appreciation for what and who you are…He has asked me to inform you and share with you the facts that the Obama Administration’s policy for Turkey and the Middleast are totally in the wrong direction, and that his policy will embark the future generations into chaos and confusion and will cause our children to consider each other as enemies."

He is right, simply because the leaders and the administrators are here only temporarily but the peoples remain forever. Yes, he is right, but why me…?  Why should I be the one who would issue this message?  How many Americans would read me or even know me?  He answered:

“ I do know that the US Embassy in Ankara, Turkey does read your articles…”

Turkish Admiral Turker Erturk continued; "He might have been right….A while ago, one of the owners of the internet news portal where my articles appear has called me and told me that“  It has been only four hours since I have posted your article but we have received tremendous amount of clicking until now. Most of them are from Europe, Gulf Countries, Iran, and Syria and, interestingly enough, two clicks from the Pentagon!"

"Perhaps your politicians, military leaders and your intelligence units have been reading and following the writers like me who post articles which criticize and analyze your country’s foreign policies, but I am afraid, you, the American people, are unaware of the things happening in Turkey and the Middleast."

The Obama Administration, is currently, for the sake of short term benefits, endangering your such long term and future benefits as the security of your future generations, your universal values, principles of democracy and human rights issues, the very foundational ideals of theU.S. people, written solidly in your Constitution, and several other ethical issues.

"Your Ambassador in Ankara, Mr. Francis Ricciardone, is pursuing to establish a triggering mechanism for an internal strife in Turkey by visiting sensitive geographical areas and playing with the sensitivities and sensibilities of the people living at these areas."

"As you may follow in the local press, the recent uprising in Istanbul which has started as an environmental issue and has quickly changed into a country-wide revolution against the current Turkish Government and its political party, the AKP, due to the brutal and excessive force used by the police unnecessarily. The issue is no longer and is now beyond “the cutting down the trees “  and  “re-constructing a replica of an old and historical Army Barracks “  which in the past, has been the symbol of religious fundamentalism."

"The reason of the current uprising in Turkey is the activities and the decisions of the current Erdogan Government and its political symbol, the AKP Party, for the last 11 years. But, the Turkish people know that the force behind the 75% of those powers and supporters, who brought Erdogan and the AKP Party to the power and the reason for the internal revolt, remains to be the U.S. Government."

"Do you know that the dimension and size of the anti-US Government feelings are the largest and biggest now in the whole Turkish – American history?  In the past, only the Socialists and Political Islamists used to lead the anti-American slogans and activities, but now, it is the whole country."

"Mr. Erdogan and his Government are trying to wipe out in Turkey the ideals and symbolism of Ataturk and his modern reforms.  I do not know how much you know about Ataturk but he is the leader who brought about the Reforms, Renaissance and Illumination Periods which the West has produced so painstakingly in the past. He is, for us, akin to George Washington and Abraham Lincoln, combined. Without those reforms, Turkey would have been in the Middle Ages."

"Do you also know that Erdogan, along with a number of other outdated countries in the region has been exporting terrorism into Syria, Turkey’s southern neighbor, as Obama’s subcontractors? Are you aware that the al-Qaeda -related killers supported by the US Government in Syria, have been eating alive the hearts and livers of humans?  Do they tell you that, as depicted in the Anthony Hopkins movie, written by Mr. Thomas Harris, the character Hannibal Lecter, who eats human flesh in the movie, has actually been recreated and supported by the US policies in Syria?"

"Do you know that the CIA is behind the operations in Turkey called Ergenekon and Balyoz,  created to allow and help the Erdogan Government to make the regime changes in Turkey; and also that the prominent and modern leaders from universities, politics, former military and media have been thrown into jails?  I know for sure, as I have my roots in the military as a retired admiral that all members of the Turkish Armed Forces, from the enlisted men to the top generals, hate United States because of its support to Erdogan?  This is the result of the US Administration’s short sighted leaders, unable to see the future."

"Do you also know that the US Government is behind and in support of the Government’s recent educational policies in the schools called 4+4+4 which will surely bring back the old ages?  The best thing that will ever graduate from this educational system would be the suicide bombers that you, the US people, know and remember so well?  Aren’t you going to feel the shame, moral responsibility and the pain in your hearts and minds, for your Government’s support for such bombers who, in the future, may, in the name of and for sake of religion, kill your children or grandchildren in the Middleast?"

"I personally have grown up in the secular educational system which have been part and parcel of the Turkish Revolution, established and led by Mustafa Kemal Ataturk after the Independence War of 1923. I have no pre-judgment against any religion, race, nationality or religious sect."

I was in London last month for a conference.  At a dinner given after the conference, a lady seated across the table from me, told me that she was a Jewish person who has moved to England from Turkey 30 years ago and had come to this conference to listen to me. During my talk at the conference earlier that evening, I had mentioned about not-so-friendly politics followed by the Israeli Government against Turkey.

"I repeated my thoughts again so that they would not be incorrectly understood. My consideration of Israeli policies as a threat to Turkey depends totally on the policies advanced and applied by the Israeli Government and is totally related with the current realities. In other words, I was not an anti-Semitic person. However, I explained her with documentary evidences that, the current Erdogan Government was in fact anti-Semitist  at heart but did not mind allying with Israeli Government in joint operations in the neighborhood, in following up their policies of   ‘ worshipping the power ‘ and ‘ disguising themselves otherwise until they attain their purposes ‘"

As I conclude my address to you, in all honesty, I wish you to know that Obama Administration’s policies are the root cause of the enmity between US and Turkish peoples and remain to threaten the regional and world peace.

I noticed the hand-held sign at the Tahrir Square during the demonstrations last Sunday, in Cairo, Egypt,  which read “ Obama Supports Terrorism “. It is actually very true. The US Government, for the sake of short term gains all over the world including Turkey, regrettably supports terrorism.