Egypt's new leadership wrangled over the naming of a prime minister, as both the Muslim Brotherhood 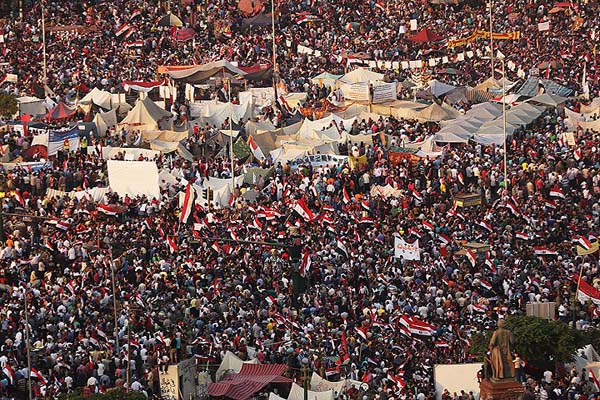 Egypt's new leadership wrangled over the naming of a prime minister, as both the Muslim Brotherhood and their opponents called for new mass rallies Sunday, renewing fears of another round of street violence over the military's ousting of Islamist President Mohammed Morsi. The calls for competing rallies come after clashes two days ago between the rival camps left at least 36 dead and more than 1,000 injured nationwide. The military said troops are beefing up security ahead of the protests and warned against any "provocative actions." Any violators will be "dealt with decisively, under the law," the army spokesman said in an official Facebook posting. In Friday's violence it sided with the anti-Morsi crowds and in one case, opened fire on pro-Morsi demonstrators. The Brotherhood, which helped propel Morsi to power as Egypt's first democratically elected leader, has denounced the military's move as a coup against democracy and demands he be reinstated. Currently, Morsi is in detention with the military, though his location is unknown. In a Facebook posting Sunday, the Brotherhood's supreme leader Mohammed Badie said the "leaders of the unconstitutional coup continue flagrant violations against the Egyptian people."

Since Morsi's removal Wednesday night, several of the Brotherhood's top figures were detained and the group's TV station and newspaper were shut down, as were three other pro-Morsi Islamist television stations. Among those detained is Badie's deputy Khairat el-Shater, seen as the most powerful figure in the group and its main decision-maker.

At the same time, the collection of liberal, secular and youth groups that spearheaded the campaign to oust Morsi, called for a mass rally of their own Sunday in Cairo's Tahrir Square to defend the country's new, military-backed interim leadership.

Last week, millions of Egyptians nationwide participated in four days of mass protests demanding Morsi be removed, angered by what they saw as the domination of the Brotherhood and Morsi's failures to address worsening economic woes. When the military ousted Morsi, it suspended the Islamist-drafted constitution and installed a senior judge as interim president to form an administration.

But divisions were stalling the naming of a prime minister and creation of a new Cabinet. In the interim period – whose length remains unknown – the prime minister will have sweeping powers to govern, while the president is expected to be a largely symbolic post.