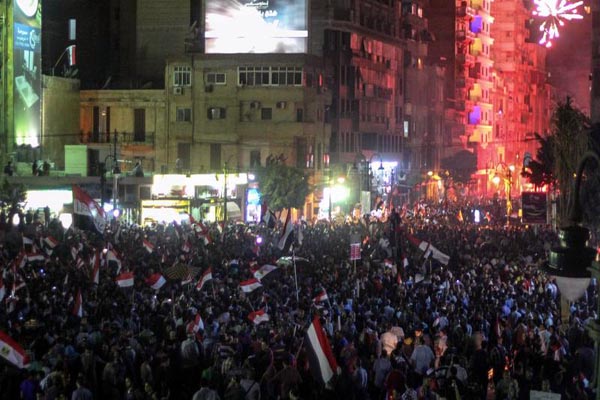 The Muslim Brotherhood is mobilizing supporters nationwide in a show of support for embattled President Mohammad Morsi, few hours after the army issued a 48-hour ultimatum to either solve the deepening political crisis or else it would announce its own roadmap for the future. Well-placed sources inside the Brotherhood said instructions have been issued to members in Cairo to assemble in Rabaa Al Adawi square in Nasr City. Thousands of Morsi’s supporters have been camping out in Rabaa Al Adawi to reject opposition demands for his resignation and early presidential elections. The sources argued that those campaigning in Rabaa Al Adawi represent only 30% of the group’s support base. They asserted that the Brotherhood has decided after the army statement to rally all its supporters to show their real numbers. The Muslim Brotherhood will not resort to violence under any circumstances, the sources stressed. Earlier today, the military issued a 48-hour ultimatum for all political rivals to find a solution to the political deadlock gripping the county before intervening. “We give all parties 48 hours to respond to the people’s demands,” the army said in a statement read out on state television. The military warned that if the parties concerned failed to achieve a breakthrough within 48 hours it will announce a roadmap and certain measures and it will supervise their implementation. Hundreds of thousands of Egyptians had taken to the streets on Sunday to press for early presidential election.