The count is expected to conclude by evening, with strong trends visible by midday. In the world's largest democratic exercise, some 900 million people were registered to cast ballots for 542 seats in India's lower house of Parliament 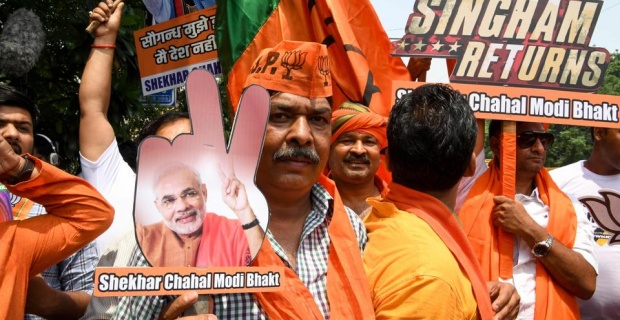 Indian Prime Minister Narendra Modi and his party were off to an early lead as vote count began Thursday following the conclusion of the country's six-week general election, sending the stock market soaring in anticipation of another five-year term for the Hindu nationalist leader. Election Commission data at midmorning showed the Bharatiya Janata Party leading in contests for 294 out of 542 seats, with its main rival, the Indian National Congress, ahead in 50 contests. The data didn't indicate what percentage of the estimated 600 million votes had been counted.

The count was expected to conclude by Thursday evening.

The election has been seen as a referendum on Modi, whose economic reforms have had mixed results but whose popularity as a social underdog in India's highly-stratified society has endured.

Critics have said his Hindu-first platform risks exacerbating social tensions in the country of 1.3 billion people.

On the campaign trail, Modi presented himself as a self-made man with the confidence to cut red tape and unleash India's economic potential and labelled Congress party president Rahul Gandhi, the scion of a political dynasty that lost power in 2014, as an out-of-touch elite.

Half a dozen exit polls released after voting concluded Sunday showed Modi and the Bharatiya Janata Party winning. A party or coalition needs a simple majority, or 272 of the seats in Parliament's lower house, to govern.

"Mr Modi's going to be the next prime minister, we are very assured of that," said Meenakshi Lekhi, a member of Parliament running for re-election in New Delhi.

Waiting for the win

Mohammad Shamshad, a 21-year-old mechanical engineer standing among about two dozen men watching live results, said it was too early to call.

"It's like a cricket match — anyone can win," he said.

In the world's largest democratic exercise, voters cast ballots on some 40 million electronic voting machines, a method India began using 15 years ago after complaints that the manual count of paper ballots was tainted by fraud and abuse.

Losing candidates and political parties have raised doubts about the accuracy and reliability of the electronic method, however, noting the machines are not used in Britain, France, Germany, the Netherlands and the United States.

The issue hit the headlines again this week.

The party officials alleged that the machines were being moved in order to be altered, but the commission said the images showed unused machines being moved into storage.

Keywords:
India ElectionsNarendra ModiIndian Prime Minister
Your comment has been forwarded to the administrator for approval.×
Warning! Will constitute a criminal offense, illegal, threatening, offensive, insulting and swearing, derogatory, defamatory, vulgar, pornographic, indecent, personality rights, damaging or similar nature in the nature of all kinds of financial content, legal, criminal and administrative responsibility for the content of the sender member / members are belong.
Related News