May promises to work with humility says Queen

Prime Minister Theresa May has promised to work with humility and resolve as the government prepares to outline its legislative programme later. 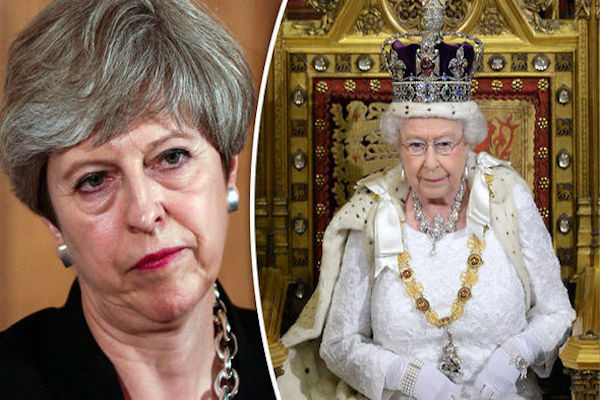 It is also expected to include measures on domestic violence and car insurance. The Conservatives are still trying to agree terms with the Democratic Unionists to secure their support for Mrs May's minority government. It means some manifesto pledges are likely to be scaled back or scrapped. Sources from the DUP have warned that the party cannot be "taken for granted", although it is expected to back the Queen's Speech when MPs vote on it next week. The speech is written by the government but read by the Queen at the State Opening of Parliament. It is the main ceremonial event of the Parliamentary calendar - but this year's will look different, with much of the usual formalities dispensed with and the Queen wearing "day dress" instead of her usual robes. The speech will be delivered at 11:30 BST and will be covered live on BBC One, Radio 5 live and online. MPs will begin debating its contents in the afternoon. With Brexit talks now under way, the government is expected to set out the laws needed to leave the EU - irrespective of the final deal agreed with Brussels. At the heart of this is the so-called Great Repeal Bill - which will repeal the 1972 European Communities Act and end the jurisdiction of the European Court of Justice. It will also copy existing EU legislation to the UK statute book, and Parliament will decide which bits to retain.