General Martin Dempsey contained an unclassified assessment of the options for using U.S. military force in the Syrian conflict. 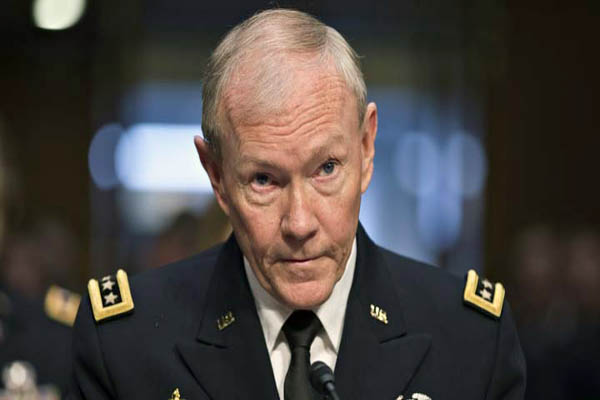 The top U.S. military officer said in a letter released on Monday that American forces could undertake a range of missions to help Syrian rebels if asked by the White House, from providing training to establishing no-fly zones or conducting limited attacks on military targets. The letter by Army General Martin Dempsey, chairman of the Joint Chiefs of Staff, contained an unclassified assessment of the options for using U.S. military force in the Syrian conflict. He indicated the administration was still deliberating what steps it should take in response to the civil war. Dempsey outlined five options he said the U.S. military was prepared to undertake: training and advising the opposition, conducting limited stand-off strikes, establishing a no-fly zone, establishing buffer zones and controlling chemical arms.

The letter was a response to questions posed by two members of the Senate Armed Services Committee last week following a confrontational hearing called to consider Dempsey's nomination to a second two-year term as chairman of the Joint Chiefs.

The letter was released by Senator Carl Levin, the panel's Democratic chairman, who along with Republican Senator John McCain had questioned Dempsey about his views.

After last week's hearing, McCain threatened to delay Dempsey's nomination until he responded to questions on Syria. McCain's spokesman was not immediately available to comment on whetherDempsey's reply had eased the senator's concerns.

While the different options have been discussed in the past, Dempsey's letter was the fullest public summary of how the military might help Syrian rebels fighting the government of President Bashar al-Assad, as well as potential risks and costs.

"All of these options would likely further the narrow military objective of helping the opposition and placing more pressure on the regime," Dempsey said in the letter.

"We have learned from the past 10 years, however, that it is not enough to simply alter the balance of military power without careful consideration of what is necessary in order to preserve a functioning state. We must anticipate and be prepared for the unintended consequences of our action," he said.

The U.S. military's current role in the conflict is limited to delivering humanitarian aid, providing security assistance to Syria's neighbors and providing nonlethal help to the Syrian opposition. The U.S. military has an operational headquarters unit in Jordan along with other assets, including F-16 jets.

-Training, advising and assisting the opposition. Such a mission could include weapons training, tactical planning and intelligence and logistics assistance, Dempsey said. He estimated the cost at $500 million a year.

- Conducting limited stand-off strikes. Dempsey said this option would use air and missile strikes to attack Syrian air defenses, military forces and command structure to damage the Assad government's ability to wage war. The cost could run a billion dollars a month and risk retaliatory strikes and civilian casualties.

- Establish a no-fly zone. Dempsey said a no-fly zone would require hundreds of strike aircraft and support units. The cost could be a billion dollars a month and would risk the loss of U.S. planes while potentially failing to reduce violence because Syria relies mainly on surface arms rather than air power.

- Establish buffer zones. Dempsey said this option would use force to establish safe zones inside Syriawhere the opposition could train and organize while being protected from attack by government forces. He said the cost would be over a billion dollars a month and could improve opposition capabilities over time. But the zones could become targets for Syrian attack.

- Control chemical weapons. Dempsey said lethal force could be used to prevent proliferation of chemical weapons and to destroy Syria's "massive stockpile" of the weapons. He said the option would require hundreds of aircraft as well as personnel on the ground and could cost over a billion dollars per month.