After President Mohammed Morsi had been ousted, Adly Mansour was sworn in as interim president. 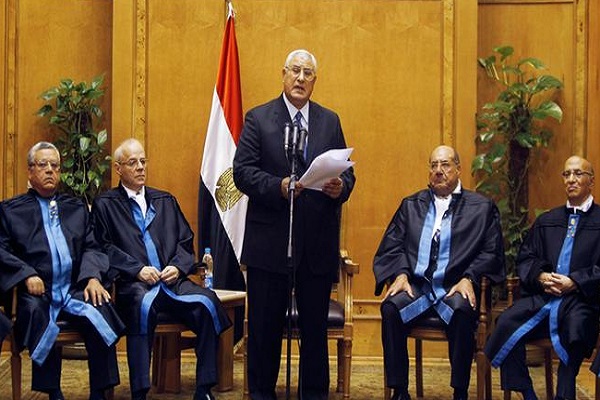 Army head Abdel-Fattah el-Sissi had announced Morsi's ouster in a televised address the previous evening. After days of mass protests against Morsi, the general had set the first democratically elected president in Egypt a 48-hour ultimatum to respond to the will of the people. Until fresh elections are called, Mansour is to serve as interim president along with a technocrat government.

The 67-year-old Mansour, who has been working for the country's constitutional court since 1992, had been in office as president of the court for just two days when the military pushed Morsi out. Morsi had appointed Mansour to the post after his predecessor, Maher al-Behairis retired at the end of June.

A new law which came into force after Hosni Mubarak was toppled forces the president to appoint one of the three longest-serving vice presidents as president of the court.

Mansour will serve as interim president

In June, the Supreme Constitutional Court had ruled the upper house of parliament, which was dominated by the Muslim Brotherhood, unlawful. DW English